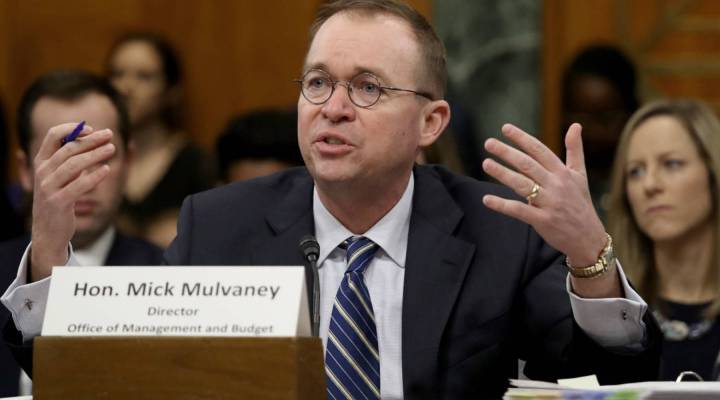 Early this week, the Trump administration released a $4.4 trillion federal budget proposal. What’s caught several people’s eye is that the GOP is usually anti-deficit, but this proposal would add to the deficit and increase the national debt. Mick Mulvaney, Trump’s budget director, while defending the proposal in front of Congress, admitted that if he was still a representative from South Carolina, he would have opposed the budget. He was a famous deficit hawk in Congress, but as a member of the executive branch, he’s touting his boss’ budget with gusto. We spoke to David Primo, senior affiliated scholar at George Mason University’s Mercatus Center and an associate professor at the University of Rochester, to  better understand how these topics affect everyday Americans. He started by giving us what he called the bathtub analogy.

What’s the difference between the deficit and the national debt?

David Primo: If you think about the water in the tub as the national debt, water flowing in to the tub can be thought of as the deficit — the amount of money that the government has to take out in borrowing each year because it’s spending more than it’s taking in. The concern that economists have is that at some point, if that water keeps flowing into the tub, the tub is going to overflow. And you’ve got a mess on your hands, or in the case of the national debt, you’ve got a crisis on your hands.

The multitrillion-dollar question: Do deficits matter?

Primo: One could make the argument that they don’t matter — that in fact, they might be a good thing, right? We could argue that the tax cuts and the spending increases we’re seeing in the latest budgets are going to sort of amplify the already positive trends we’re seeing in the economy. But there is a flip side to that at some point. Our debt is going to get so large that it’s going to drive up interest rates. Other countries, other individuals, are going to stop being as interested in buying up our debt, especially if there’s a concern that we may at some point not be able to pay it back. And that’s what I’m worried about. I’m worried about the long run.

How does the deficit impact a regular person?

Primo: It can impact you in a couple of ways. If this increase in the deficit that is fueled by tax cuts and fueled by spending increases leads to an improvement in economic growth, that’s actually a benefit for you in the short run. Or if it leads to higher interest rates and you’re a saver, and all of a sudden you’re getting more money for that savings in your bank account, that’s a positive for you. The negative is that interest rates going up means that if you’re a borrower, you’re paying more. But it’s the long run that we should be starting to think about now, but we’re not. You should be concerned about the size of the national debt in 10 years and 20 years and 30 years, and its effects on your ability to retire, on its effects on your ability to get health care and so forth.

But for now, interest rates are still low. The markets continue to gobble up our debt. The U.S. dollar is the world reserve currency. Is anybody out there saying the U.S. isn’t a good bet fiscally?

Primo: And that’s sort of the benefit of being the United States and also the risk of being the United States. So the benefit, as you just said, is right now we have the ability as a country, because we are the world’s reserve country, to perhaps take on more debt than other countries can. American debt by comparison is very, very safe. And as a result, there’s still a lot of demand for our debt. Interest rates are low right now. But a lot of this debt that’s being issued is short-term debt. What happens when that debt has to be reissued, and interest rates that other countries and individuals will demand to buy up that debt goes up all of a sudden? All right, the fiscal picture gets gloomier. And, you know, there isn’t an announcement that’s made, oh tomorrow, the rest of the world is going to stop buying up U.S. debt. It can happen very suddenly.

How can we know if there’s a crisis coming?

Primo: That’s the risky part; what economists like to call a creeping risk. Today it’s not going to affect us, tomorrow it’s not going to affect us, but it builds up over time and eventually you end up in a crisis situation. If our national debt doubles again, as it’s predicted to do as a share of the economy in the next 30 years, for the average American it’s going to have an effect on the ability for the federal government to undertake the activities that Americans think are important. So there’s a lot of talk about how Republicans want to, you know, eviscerate entitlements.

How do entitlements play in to this? Are you saying that our Medicare and Social Security are on the line here?

Primo: Yes. If some action isn’t taken now to shore up Medicare, to shore up Social Security, those programs are going to be in far more jeopardy in 10, 20 years than they are today. I like to make the analogy of the connection to retirement. You know, if your time horizon is that I plan to retire in 20 years, 30 years, it’s easy to not think about it. It’s easy to not worry about it. But the earlier you start dealing with it, the better off you are. So if you’re the average member of the public, one thing you could think about is well, if, as it seems likely, we’re not going to see immediate action on dealing with the debt and deficit problems we face as a country, what is that going to mean for my financial situation in 20 years? And that has to be factored in to things like retirement planning and savings. The challenge that we all face as human beings is we don’t like to think that far into the future. It’s very hard for us to do. That’s why so many of us don’t save enough for retirement — for the same reason that you should eat healthy today so that you don’t get heart disease in 20 years. We should start thinking about the federal debt today.

Budgets can also be balanced by increasing revenue. Congress and the administration just passed a pretty large deficit-financed tax cut. Does this make the country’s financial situation worse?

Primo: I wouldn’t argue that the tax cut is the cause of our debt and deficit problems, but it is sort of additional water in that tub, if you will. It’s just adding to an already existing problem. The challenge that we face politically is that if you are a politician today and you say, you know, we do have a debt and deficit problem, and as more and more individuals retire, need Medicare, need Social Security, we need to do something to make those programs sustainable over the long run; that is a politically dicey proposition. Elected officials above all else want to be re-elected. And it’s very difficult when you face a public that is much more likely to punish you for what are perceived to be cuts in entitlements than they are to reward you for saying that you’re going to reduce the national debt and prevent a crisis 20 years down the road. And that’s the challenge, is that the politicians, and to some extent, voters, are short-run focused. But our problem is a long-run problem.