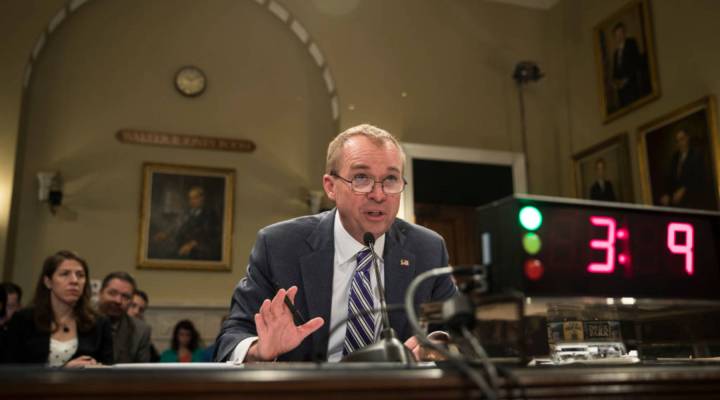 Director of the Office of Management and Budget Mick Mulvaney testifies during a House Budget Committee hearing concerning the Trump administration's fiscal year 2018 budget, on Capitol Hill, May 24, 2017 in Washington, DC. Drew Angerer/Getty Images
Make Me Smart With Kai and Molly

Politicians love to talk about the national debt and especially the deficit. But as different factions jockey for their plans and policies, things can start to get confusing. Whose plan is going to cost more? How important is it to be “deficit-neutral”? How does the debt ceiling factor into all of this?

On this week’s Make Me Smart, we asked The Budget Guy, Stan Collender, about  it all. He says don’t worry if you don’t get it, you’re not alone.

“This is the series of definitions, debt and deficit, that most confuses the most people, including members of Congress,” Collender said.

But it’s important to bone up, because this is all going to come up over and over again. Senate Republicans unveiled their health care bill Thursday morning, and it’s broadly similar to the bill that passed the House. The health care bill is sort of a tax bill in disguise, and the White House is still crafting broader tax reform. That’s next on the agenda. President Trump’s 2018 budget proposal is steeped in “trickle-down” or supply-side economics, which can increase deficits.

So, what are we talking about when we talk about deficits? Simply put, a deficit is the difference between what the country is spending and what it’s making. The Congressional Budget Office (CBO) projects that for fiscal year 2017 the U.S. will spend $559 billion more than it took in. The debt is the total amount the country has borrowed trying to make up that difference year after year. That number fluctuates a bit, but it’s usually around $19 trillion. It hasn’t been at zero since 1835. Here’s the most updated tally from the Treasury.

For our “Whiteboard” series a couple years back, Paddy Hirsch explained the difference between debt and deficit using another one of Trump’s favorite topics: The trade deficit.

Simply put, deficits, when it comes to the budget or trade, aren’t good or bad. They’re just kind of weird. Debt is bigger, scarier and subject to bitter partisan showdowns in the eleventh hour over how much the U.S. can borrow. Don’t hold that last bit against debt though. Another vote on the debt ceiling could come as soon as next month, by the way.

The House health care bill would cut the deficit by $119 billion in the next decade, according to the CBO. That savings was a key selling point for the GOP, especially since the same CBO report found the bill would cause 23 million people to lose their insurance. Meanwhile, the CBO reported President Trump’s budget proposal would increase the deficit in that same period, albeit more slowly. Trump acknowledged that in his conversation with The Economist last month.

“It is OK, because it won’t increase it for long. You may have two years where you’ll…you understand the expression ‘prime the pump’?” he said.

We do, actually, but that’s not exactly what Trump is doing here, and the difference is important. His budget isn’t spending big to kick-start economic growth. The economy is actually pretty healthy, and Trump isn’t spending as much as he’s cutting taxes for the rich.

The longer-term issue is how those cuts will affect the national debt. Trump boasted he was “the king of debt” during his campaign — not to be confused with Commerce Secretary Wilbur Ross, the so-called “Bankruptcy King” — and, indeed, the Atlantic points out that Trump’s tax plan could add trillions to the debt.

But Trump’s public statements on the debt have promised a different course. During the campaign he promised to eliminate the debt in eight years. Economists scoffed, in no small part because the U.S. hasn’t been debt free since before the Civil War. A little over a month after being sworn in, Trump boasted that the debt fell by billions.

The media has not reported that the National Debt in my first month went down by $12 billion vs a $200 billion increase in Obama first mo.

But that statistic, while technically true, is close to meaningless. Leaving aside the nation’s economic health in 2017 compared to 2009, and the tiny dent $12 billion makes in a $19 trillion obligation, debt changes all the time. The Washington Post’s Wonkblog wrote at the time:

The level of debt fluctuates day to day and week to week, depending on seasonal changes in growth and when the government makes payments, collects tax revenue, issues new debt and other debt matures — making the data very susceptible to cherry-picking. Using the same logic, for example, you could claim that after four days in office Trump increased outstanding public debt by more than $10 billion, and that Obama had reduced it by $6 billion.

There’s also the fact that Trump simply hadn’t taken any action in his first month that would have changed the debt in a meaningful way.

So, the debt and the deficit are very different, but they’re both used by politicians to obfuscate and sell the public on all kinds of stuff. Under an administration that famously distrusts economic data, knowing how Washington does the numbers is all the more important.