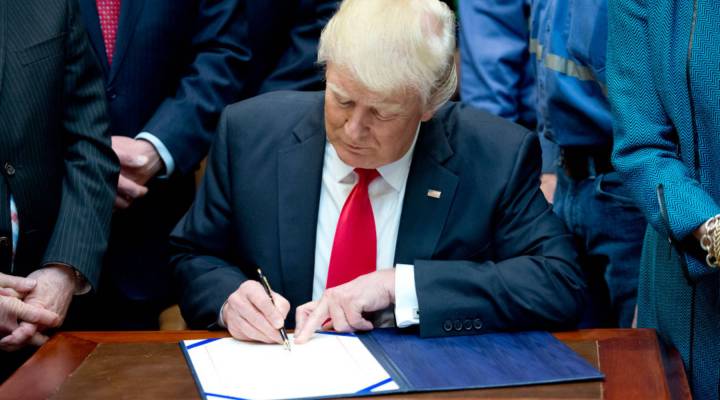 COPY
President Donald Trump's administration is said to be considering changes to the way the trade deficit is calculated. Ron Sachs-Pool/Getty Images

President Donald Trump's administration is said to be considering changes to the way the trade deficit is calculated. Ron Sachs-Pool/Getty Images
Listen Now

The Trump administration is causing an uproar among economists because the White House is said to be considering changes to the way the trade deficit and economic growth are calculated. Economists generally aren’t a very excitable bunch, but mess with numbers and they get upset.

“It is cooking the books,” said Don Boudreaux, who teaches economics at George Mason University. “It verges on fraud.”

Boudreaux said Donald Trump’s administration is asking the Commerce Department’s Bureau of Economic Analysis, which issues trade deficit figures, to change how products are counted that just cross into the United States briefly on their way to another country. Right now, they’re counted as imports and exports. Boudreaux said the White House just wants to count them as imports to help justify renegotiating the North American Free Trade Agreement or raising taxes on imports.

“To count them as imports and not count them as exports — that artificially inflates the trade deficit figure, which is the goal,” Boudreaux said.

But the Commerce Department said any change would be to make the numbers as precise as possible. Edward Alden, who’s with the Council on Foreign Relations, said the department should think twice.

“If they’re going to change it, I would like to see a really compelling rationale. And I haven’t seen that yet,” he said.

The White House might also change the way it measures economic growth, issuing unrealistically rosy forecasts, according to Stan Collender, a budget guru at MSL Group. The administration could use these numbers to persuade Congress to back its spending plans.

“This would be a way to curry favor, get the votes they want,” Collender said. “Even if they know the deficit ultimately is going to be much higher, they’re thinking this is going to be someone else’s problem.” Collender said other presidents have used overly optimistic forecasts to justify their spending, but never to this extent.