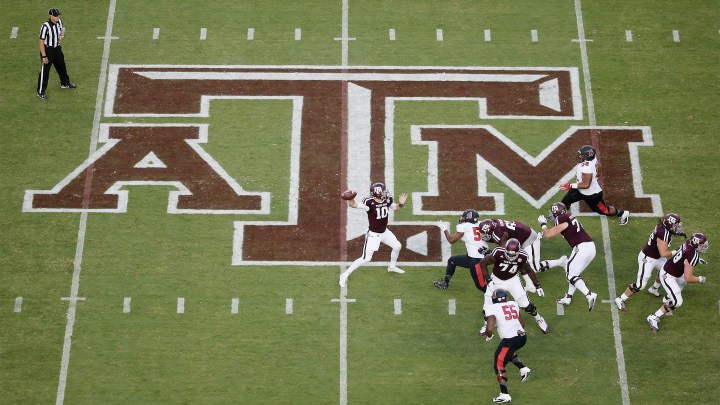 COPY
A 2015 Texas A&M football game. Black students account for a much smaller proportion of the student body than the state's Black population of 12%. Scott Halleran/Getty Images
Race and Economy

A 2015 Texas A&M football game. Black students account for a much smaller proportion of the student body than the state's Black population of 12%. Scott Halleran/Getty Images
Listen Now

“We’ve grown up with the same type of people, at least that’s been my experience, and we’ve kind of become accustomed to those same types of people once we get to A&M,” Read said.

He would like to see more people who don’t look like him on campus because it will help prepare him for the workforce. He said that currently, too many Texas A&M students have a hard time understanding the civil unrest that’s emerged around the country after the police killing of George Floyd in Minneapolis.

The board of regents at Texas A&M University voted unanimously on Monday to create a $100 million scholarship fund to address diversity issues on the system’s 11 campuses. Chancellor John Sharp said the goal is to make the university reflect the population of Texas. The state’s population is 12% Black, while Black students make up less than 4% of the student population on the system’s flagship campus.

Elaine Mendoza, chairman of the board of regents at the Texas A&M University system, said with the country so focused on social inequities, there’s a sense of urgency to diversify the student body.

“There’s no better time to get it off the ground and to make the tough investment than right now,” she said.

The university plans to dole out the $100 million in diversity scholarships over 10 years.

Julie Peller, executive director of Higher Learning Advocates, said it’s likely that more schools will be rolling out diversity initiatives, which is a good start.

“The key, though, is watching the implementation,” she said. “The key is to watch how it plays out, how those students are not only being reached, but how they’re being served throughout their time on campus.”

Scholarships can change your demographics, but once you improve those numbers, it’s about inclusion. Peller said schools have to make their campuses feel more welcoming to more people.