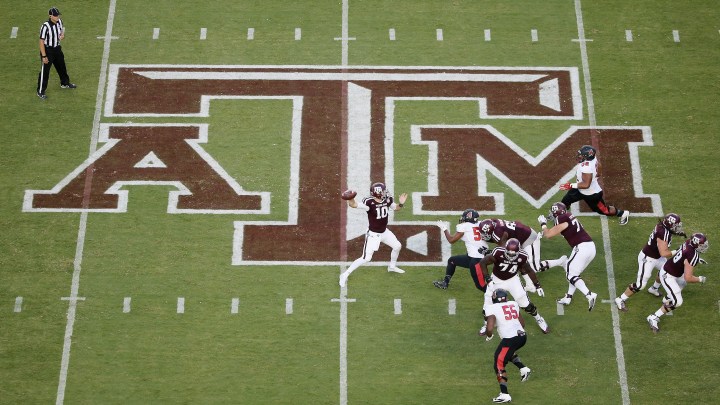 COPY
Because of COVID, Texas A&M is allowing only 25% of the stadium to be filled for its upcoming home games, but that’s still about 30,000 people. Scott Halleran/Getty Images
COVID-19

Because of COVID, Texas A&M is allowing only 25% of the stadium to be filled for its upcoming home games, but that’s still about 30,000 people. Scott Halleran/Getty Images
Listen Now

On a rainy Tuesday morning just before a modest lunch crowd arrived, Wade Beckman sat checking his phone on the patio of Shipwreck Grill, one of the restaurants he owns in College Station, Texas, a town of a little more than 100,000 that’s dominated by Texas A&M University. The school’s football team starts its season on Saturday night against Vanderbilt. Because of COVID, the school is allowing only 25% of the stadium to be filled, but that’s still about 30,000 people.

Beckman’s restaurants have been struggling since the coronavirus emerged in the spring. He operated at a loss over the summer and said he needs things to pick up this autumn.

“Yeah, we’re scared,” Beckman said. “If we don’t have fall, by January, we’re not going to be in a position where we can continue to operate. So we’re putting a lot of bank on, these football game weekends are at least going to bring us up to paying our bills.”

He admitted he didn’t know what to expect on Saturday. Texas A&M isn’t allowing any tailgating for the game, which could mean good traffic for his restaurant.

“This weekend is so just crazy unknown,” he said. “We know it’s going to be, or, we’re pretty sure it’s going to be busier than a normal weekend. But we just don’t know to what level.”

In normal times, banking on being busier than normal at a bar or restaurant on a game day in College Station is a safe bet. According to a study commissioned by the Texas A&M athletics department, people who go to sporting events spend more than $120 million a year. It’s the only game in town.

“We don’t have any natural wonders and we don’t have South by Southwest, but what we have is Texas A&M and football,” said Dennis Jansen, director of Texas A&M’s Private Enterprise Research Center. “We draw tourists from other cities to come here to watch football.”

Those tourists normally fill hotels and spend money all around town. Some locals even leave town and rent out their homes to visitors.

Ben Wiggins lives in College Station and would normally go to football games with his family, but not this time around, not when coronavirus is still spreading.

“I still love the football team, big fan of the team, and of course, the university,” he said. “But at this time, the correct choice for me is to stay home.”

He doesn’t begrudge anyone for going to the game and trusts that the university has done all it can to make sure people are social distancing and understand the risks.

“There will be thousands of people there and I don’t think less of any of those people,” he said. “But it’s just a personal choice for me. I might attend games later in the season.”

But, for now, he’s lying low. His daughter is celebrating her first birthday on Saturday, so they’re going to have a little family-only party for her, instead.