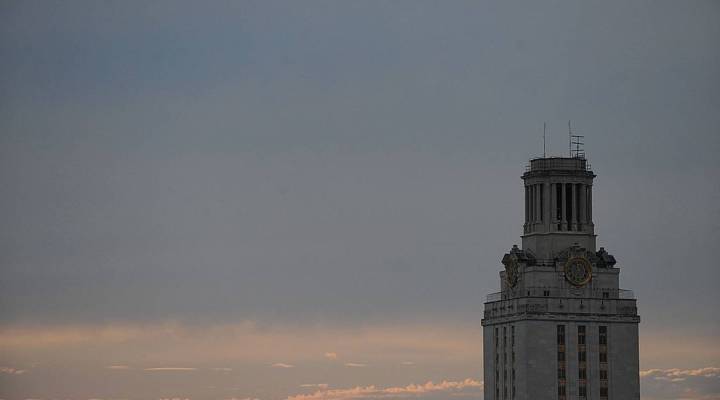 Steven Goode had the unenviable task of helping the University of Texas comply with the state’s new gun law, as chair of a campus carry working group.It’s a law he dislikes so much, he’s still hoping it will be repealed.

“Sometimes you have not the best situation that you want and you have to do the best you can with it,” he said.

Starting Aug. 1, people with concealed carry licenses will be allowed to bring their weapons onto public college and university campuses. According to the National Conference of State Legislatures, Texas is the eighth state to explicitly allow guns on campus. A similar bill is pending in Georgia.

The Texas law gives university presidents leeway to create “reasonable rules” for their own campuses. Law professor Goode and his group worked for months to come up with recommendations on how handguns should be stored and carried, and where they should be off-limits. Ultimately UT decided to ban guns at sporting events, health centers, and in dorm rooms, but not in classrooms. Doing so, Goode said, effectively would have flouted the law.

“We were asked to do a job and to try to come up with the best possible set of recommendations to implement the law that has been passed,” he said. “So that’s what we did.”

They did so against some pretty stiff opposition. Students and faculty have held protests, and more than 1,700 professors signed a petition opposing guns in the classroom.

“I just didn’t think that was appropriate, to have firearms, concealed or not, in classrooms and other learning environments,” said Fritz Steiner, dean of the School of Architecture. Steiner is leaving Texas for a new post at the University of Pennsylvania, partly because of the new gun law. An architecture class might seem like the last place someone would reach for gun, but it’s an intense and competitive environment, where, Steiner said, professors critique students on very personal work.

“Anyone who’s ever taken an examination or defended a thesis or a dissertation knows those are stressful situations,” he said. “I don’t think that having a firearm present when one is involved in a very emotional interchange is a good idea.”

Another popular professor, of economics, has also left. At the University of Houston, the head of the faculty senate recently advised fellow professors to limit their office hours, be careful discussing sensitive topics and not, “go there” if they sensed anger. A slide from the presentation ended up on Twitter.

Pharmacology professor Andrea Gore, chair of the faculty council at UT-Austin, said she doesn’t plan to change the way she teaches anatomy and physiology.

“But I have heard from my colleagues that some of them are going to be much more cautious about taking more provocative points of view,” she said. Gore also worries that some of the state’s best and brightest students might opt for private colleges, which are exempt from the law, or go out of state.

“When you hear from students or you hear from their parents, which I have, that they’re not going to go to a public university anymore in the state of Texas,” she said, “that translates into many people who are never going to come back to Texas because they establish roots somewhere else.
Several students eating lunch on the UT campus recently weren’t all that worked up about the issue.

Friends Leah Vann and Dorie Kaye, both juniors at the University of Texas at Austin, disagree about whether guns should be allowed on campus.

“I’m okay with it,” said junior Leah Vann. “It’s the right to bear arms. We have a right to protect ourselves.
Vann grew up around guns in Forth Worth and plans to own one someday.

“A lot of people probably carry guns illegally anyway and I probably don’t even notice, so I think it’s not going to make that much of a difference,” she said.

Vann sat in a student center just steps away from UT’s clock tower, where in 1966, an engineering student shot and killed 14 people. Since then shootings on college campuses have become so frequent, Vann said she would feel safer if some of her fellow students were armed.

Her friend, junior Dorie Kaye, saw that same risk as a good reason to restrict guns.

“What if there is somebody on campus who, you know, wants to use that gun for harmful purposes?” Kaye said. “If I had to choose a side, I wouldn’t want guns on campus.”

Advocates for campus carry policies point out that in Texas, people with concealed carry licenses are much less likely to commit crimes than the general population. At the more than 150 campuses around the country that allow guns, there have been a handful of accidental shootings – including one by a professor at Idaho State who shot himself in the foot during class.

Even those who oppose the law concede its day-to-day impact could be minimal. More than half of UT’s 50-thousand students are under 21 and too young to qualify, said Goode.

“We’re talking about somewhere between half a percent and one percent of our students we anticipate will have licenses,” he said. “That doesn’t mean they’ll all carry their handguns on campus.

Still, when he looks out into his classroom next fall, he said he won’t help but wonder who’s packing.