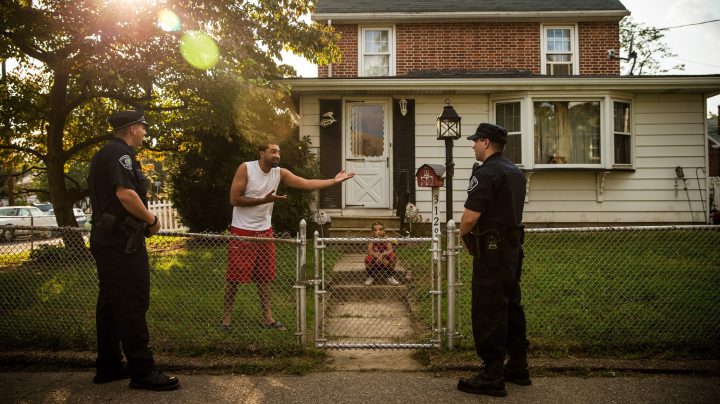 The new White House incentives for police procedures include getting outside accreditation and encouraging mental health, addiction and homelessness experts to respond with police to emergency calls. Activists have criticized President Donald Trump’s executive order Tuesday as largely cosmetic.

Nearly a decade ago, one police department actually started the process to disband and replace its force. The city of Camden, New Jersey, took these measures in the face of a one of the highest murder rates in the country and a funding crisis. Some of the officers were hired back to join a new county police force under a new union contract.

Some residents of Camden have been critical of the police reorganization, however. Just this Monday, activists from the Camden, We Choose Coalition said during a press conference that the move did not reflect community needs. Activists say it led to an increased police presence of officers that live outside of Camden and, on the whole, do not reflect the racial demographics of the community. In fact, activists actually sued the Camden City Council and petitioned the county takeover of the force. They eventually won a ruling form the New Jersey Supreme Court that the changeover was done illegally, but the force was already in place.

Louis Capelli Jr. is freeholder director (a county executive) for Camden, and he managed the transition, built largely on listening closely to Camden residents to embrace “community policing.” He spoke with “Marketplace Morning Report” host David Brancaccio, and the following is an edited transcript of their conversation.

Louis Cappelli Jr.: In 2012, Camden city was undergoing a fiscal crisis and a public safety crisis. It could no longer afford the existing police contracts, their budget was $63 million and growing exponentially. And there was a murder rate higher than many third world countries. So we knew we had to make a change. We decided to wipe the slate clean in order to instill a new public safety culture to bring community policing to Camden city.

Brancaccio: I hear this phrase, “community-oriented policing,” but what does it look like in practice?

Cappelli: Well, when our new officers hit the street after training, one of the first things they do is knock on doors and introduce themselves to residents, hand out a business card. We have pop-up block parties. We have free ice cream for kids. So it’s all about trying to create as much contact as possible between police officers and residents in a positive fashion ⁠— not in times of emergency.

Brancaccio: Is the current police force now unionized? Because you tore up the old contract when you disbanded the old police force.

Cappelli: Yes, it is unionized. It’s actually the same union. The big difference is its new leadership. The new leadership is much more professional than the prior leadership of the union. They have fully engaged with regard to their belief in the community-policing model. They work with us. They negotiate hard on behalf of their members, don’t get me wrong, but they understand the fiscal circumstances of the city and the absolute necessity to make residents feel safer.

Brancaccio: I think it’s New Jersey that requires police applicants, people who want to get into the force, to take the civil service exam. You found that process can hinder efforts to make the police force more diverse?

Cappelli: It absolutely does, because we are a civil service county. That means in order for a police officer to be hired or to be promoted, they have to take the civil service test. That test has been proven to be racially and culturally biased. It is a proven fact that residents of urban areas do not do very well on these tests as compared to folks from suburban areas. So we are in the process of preparing legislation that we hope will be considered by the legislature and by the governor to do away with this test. And to give us the ability to hire residents of our city. We are constrained, by this civil service process, from hiring residents of our own city and from promoting minorities within our own force.

Brancaccio: If things go bad, what about accountability?

Cappelli: I can tell you this, over the past seven years, the number of complaints of excessive force by our police have decreased by 95%. And that’s because anytime one of our officers uses any force, an internal investigation takes place that day. So it’s a complete review of any use of force whenever it happens in a timely fashion.

Brancaccio: What about other metrics, are you keeping careful tabs on how the reconstituted police force does routinely?

Cappelli: Yes, our crime statistics are a great indication. The murder rate is down almost 70%. All crimes are down nearly 50%. So we do watch the statistics very closely. But we also try to take the temperature of our residents because the real objective here is to make sure our residents feel safe within their own city. And I think we’ve made great strides.