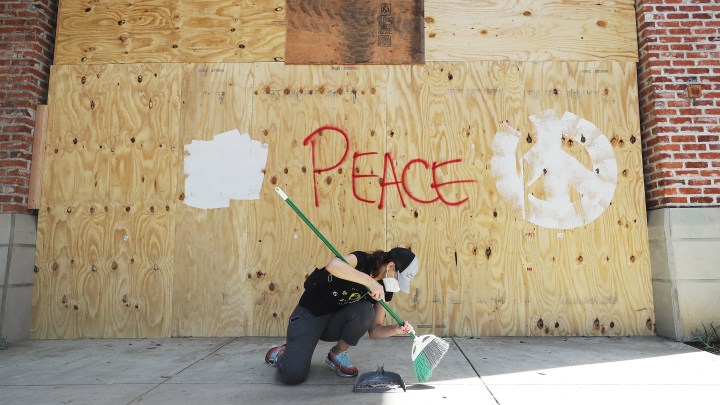 COPY
A volunteer cleans up following protests in Santa Monica on June 1. Activists and academics say a broken window is easy to fix; the hard work is fixing why it was broken in the first place. Mario Tama/Getty Images
Race and Economy

A volunteer cleans up following protests in Santa Monica on June 1. Activists and academics say a broken window is easy to fix; the hard work is fixing why it was broken in the first place. Mario Tama/Getty Images
Listen Now

Kevin Zatizabal, 30, lives in the Bronx, a lower-income New York borough that’s mostly Black and Latino. When he saw stores in his neighborhood being damaged during this recent wave of protests, he was upset. So he put out a call for help on social media.

He didn’t know what to expect. For his cleanup event, he said around a thousand volunteers showed up, and his appeal raised nearly $40,000, which he says he’ll be donating to businesses that didn’t have insurance.

“The only way to keep the community going is if we take care of it,” Zatizabal said. “This is what we’re doing. This is how we’re going to invest the money we are raising. Because we are the community.”

During the recent days of protest, there have also been incidents of damage to businesses in low-income neighborhoods and in wealthier areas, such as Beverly Hills, California. But property damage is on a much lower scale than in past protests, like those in the 1960s following the assassination of Martin Luther King Jr.

Today’s incidents are being overstated, said Lester Spence, professor of political science and Africana studies at Johns Hopkins University. He said there’s a lot of hysteria on social media. And although there has been damage to minority-owned business and Black neighborhoods, “the economic violence visited upon these neighborhoods is far more damaging.”

He’s talking about lack of investment, low wages and a general dearth of opportunity.

Unlike in the past, Spence said, the recent disturbances haven’t been concentrated exclusively in low-income, Black and brown neighborhoods. They’ve also hit businesses in wealthy, predominantly white areas, like SoHo in Manhattan.

For Bronx-based activist Monxo Lopez, the focus on these businesses is dehumanizing.

“It feeds into this hysteria, this idea that Black and brown people self-destruct,” Lopez said. “It leads to deploying the police to protect property, not life.”

And, he said, there’s reason to believe those wealthier neighborhoods will rebound far more quickly than the poorer ones.

Jamein Cunningham, professor of economics at the University of Memphis, agreed.

“These events are associated with negative consequences afterwards. More police killing of civilians, lower property values, less job opportunities, populations leaving these communities, both white and Black,” Cunningham said. “You want to be aware that you want to address some of these underlying inequities that exist in society.”

In other words: A broken window is easy to fix. The hard work is fixing why it was broken in the first place.