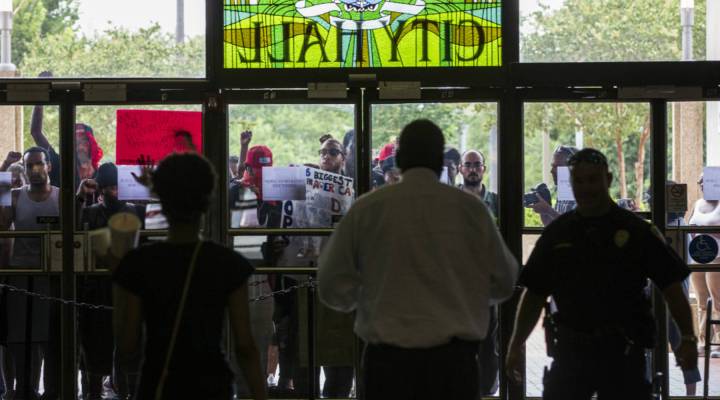 COPY
Officials keep an eye on a small group of protesters staging a silent protest at the Baton Rouge City Hall on Monday over the Alton Sterling shooting. Mark Wallheiser/Getty Images

Officials keep an eye on a small group of protesters staging a silent protest at the Baton Rouge City Hall on Monday over the Alton Sterling shooting. Mark Wallheiser/Getty Images
Listen Now

As protests continue over the recent police killings of black men in Falcon Heights and Baton Rouge, so do efforts to raise bail for those arrested during protests.

Crowdfunding sites for jailed protesters in both cities have collected more than $256,000 as of Tuesday morning. The majority of the funding has been raised by the Louisiana chapter of the National Lawyers Guild.

Even as support has rolled in, some familiar with the situation said the arrests and holding of protesters are out of place.

“Most of the time, protesters are released, sometimes were charged with misdemeanors,” said Nekima Levy-Pounds, president of the Minneapolis chapter of the NAACP. “In this instance, it seems as though the powers that be are taking a heavy-handed approach.”

There are different strategies when it comes to protests and arrests, including avoiding actions that would lead to arrest as well as planning for who would get arrested. In the latter cases, the matter of bond would already be decided before the protest.

The need for bail in the cases of the Minnesota and Louisiana protests may indicate a lack of planning.

“The need for bail most often comes up when the protesters are arrested when they didn’t necessarily expect to be arrested or hadn’t really planned for it,” said Pamela Oliver, a sociology professor at the University of Wisconsin-Madison.

Oliver said protests as reaction to shootings by police occur much more spontaneously than, say, a planned march.

“In that context, it’s not surprising that things would be evolving unexpectedly,” Oliver said.

Levy-Pounds said arrests in Minnesota stemmed from actions taken by agitators not affiliated with the Black Lives Matter movement.

“They were throwing rocks and bottles at police officers, and so I believe that that has contributed to all the things that are happening now for those who have been jailed,” she said.

Correction: A previous version of this article misidentified one of the locations of the recent police killings of black men. The text has been updated.