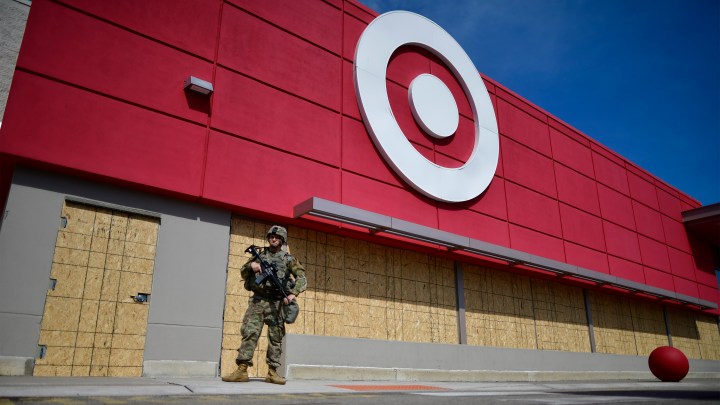 COPY
A member of the Pennsylvania National Guard outside a boarded Target store in Philadelphia Wednesday. Mark Makela/Getty Images
Race and Economy

A member of the Pennsylvania National Guard outside a boarded Target store in Philadelphia Wednesday. Mark Makela/Getty Images
Listen Now

In New York, government officials have pulled together $500,000 to help small businesses in the Bronx that were damaged or ransacked during these days of protests. The mother of Eric Garner — the Staten Island, New York, man killed in 2014 by a police officer who used a chokehold — was in full support of protests in recent days, but has called people who stoke violence “opportunists.”

In Minneapolis, an insurance group estimates damage at about $25 million. Many demonstrators say peaceful protesting is essential; others say equal justice and not property damage is the central issue here.

It’s not clear yet who is responsible for the illegal activity — whether it’s outside groups or people who live in these cities. But what makes people want to smash windows and destroy property?

“It’s never just about the triggering event,” said Darnell Hunt, a professor of sociology at the University of California, Los Angeles. “They tend to be the result of an explosion of underlying factors that have been simmering for years.”

“A lot of people from those communities would argue, well, it’s really not my community. In fact, the businesses in this community often exploit me,” Hunt said.

“When police try to impose order, it creates more frustration and brings more people out and more resistance,” said Kevin Mumford, professor of history and African American studies at the University of Illinois at Urbana-Champaign. He said once the frustration becomes physical, people may act out against businesses that feel symbolic.

“It’s not completely spontaneous,” he said. “There’s a narrative.”

Mumford said brands and their buildings can be a physical representation of inequality. For instance, Target was hit early in Minneapolis. The brand is headquartered there, and in 2004, the company donated $300,000 to the city to help purchase 30 surveillance cameras downtown. And it has partnered with the city’s police department in other ways that have been criticized by local activists.

“We’re seeing a lot of activity in relatively upscale and affluent communities from coast to coast,” he said, adding that of course some people could be stealing to take advantage of the moment. But for others, this could be a last resort to bring attention to inequality.