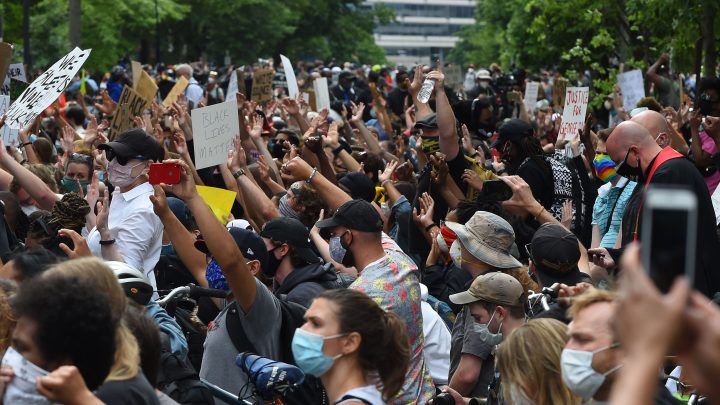 COPY
Protesters in front of the White House on Tuesday. Roberto Schmidt/Getty Images
Race and Economy

Ownership of stocks, the unemployment rate and average wages are just some of the places we see the racial wealth divide in this economy. Marketplace host Kai Ryssdal spoke with Dorothy Brown, professor at the Emory University School of Law, about the economic inequality Black Americans face. The following is an edited transcript of their conversation.

Kai Ryssdal: Obviously, the proximate cause of what is happening in this country today, and in the past couple of days, is not the racial economic divide, right? That’s not the immediate instigating factor, but you cannot discuss what’s happening without that, right?

Dorothy Brown: Correct. In fact, I could draw a line from what is happening to the economic divide. When we think about state and local government budgets and how much of taxpayer dollars, including Black taxpayer dollars, that are spent on policing as opposed to social programs, yes, there’s a direct line.

Ryssdal: This is a situation that, as you and I have discussed before on this program, is not within the power of any one president — single term or two terms — to fix. There are some structural issues here that I think we have to address. One is actually the structure of how Blacks are deprived economically. Could you talk about that for a little bit?

Brown: Yeah, sure, you can think about it from the perspective of getting a job. The Black unemployment rate has always been at least twice as high as the white unemployment rate. And we see with the essential workers that are disproportionately Black, they don’t have access to health care, they don’t have access to retirement accounts. They most importantly don’t have sick days. So in addition to the police violence, COVID-19 has really brought to the fore the racial economic inequality.

Ryssdal: Do you think with the pandemic and the lockdown and the bitter political divisions in this country, do you suppose this is a moment where we might actually be able to take action on some of these structural issues? Because Lord knows, we’ve been talking about it in this country at least for 50 years.

Brown: Agreed. I think the George Floyd tape showed many Americans who often make excuses for these things that there was no excuse. And you see multiracial protests from city after city after city. Most of the people protesting want to start a new system because the way things were, we’re leaving a lot of people out. If you want an inclusive economy, you have to deal with racial equality, and you have to start new.

Ryssdal: Yeah, no, I hear that. With the acknowledgement that you are a lawyer and a specialist in tax policy and race and class and not an economist, I wonder if I can nail you down a little bit on economic policy choices that might be made to start a change? What do you think of?

Ryssdal: Very quick personal question, if I might on the way out here. You’ve been studying and living this stuff for a very long time. How you holding up?

Brown: It’s tough. I can’t even… it’s tough. Thank you for asking. It’s so hard to watch the video. It’s so hard to, you know, console my friends. It’s so hard to hear of friends who have been struck with the illness. But here’s what I know. I know my soon to be 89-year-old mother who lived through Jim Crow went through a lot worse than this. And if she can do it, so can I.