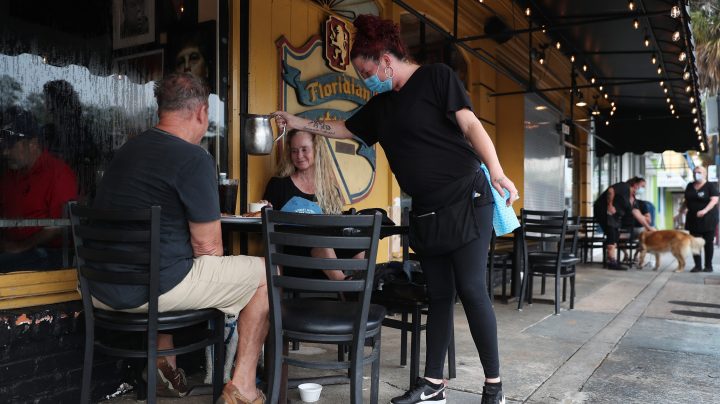 COPY
As states — and counties — begin reopening at different stages, it can be hard for businesses to know what they can and can't do. Joe Raedle/Getty Images
COVID-19

As states — and counties — begin reopening at different stages, it can be hard for businesses to know what they can and can't do. Joe Raedle/Getty Images
Listen Now

When the country started shutting down back in March, the rules for what could stay open were different from state to state. And they were sometimes confusing.

Some states allowed outdoor construction, but not outdoor landscaping. Others deemed golf courses essential businesses. Now as a patchwork of states start to reopen, businesses that fall into a gray area are wondering when they can reopen, too.

Like a lot of salons, Bespoke Hair Studio in Washington, D.C., makes money from more than just haircuts and coloring. Samantha Banks is the owner.

“I have a glass door — like a picture window — and you can see my beautiful display of products,” Banks said.

She thought she could possibly do curbside pickup for those products, even though she can’t give haircuts, Banks said. But she never tried to find out. She thinks it’s too early and doesn’t want it look like she’s cutting hair and not following the rules.

Elizabeth Milito, senior executive counsel at the National Federation of Independent Business, said business owners have been flooding her phone with questions about the rules as different states — and sometimes different counties within those states — operate in different stages.

“It’s kind of all over the place,” Milito said. “The reopening orders inevitably result in relief, excitement, confusion — and then for some business owners — disappointment.”

Kylie North said she experienced all those feelings recently. She and her wife own Water Bear Bar, a cocktail lounge in Boise, Idaho. Stage two of Idaho’s reopening includes in-restaurant dining. She thought since they serve food too, they might count.

“We were quickly were reminded no we don’t [count],” North said.

The business is licensed as a bar. And in Idaho, 40% of sales must come from food to be considered a restaurant. Water Bear clocks in at only 25%.

And though it’s hard for her to watch other businesses on her street open their doors, North said she gets it. Bars are not restaurants. And she wants her bar to be a place where people can mingle, she said.

“So much of going to a bar is being more fluid,” North said. “Like we could meet the right one. They could be just sitting right next to me.”

Or eventually, the “right one” might be sitting six feet away.