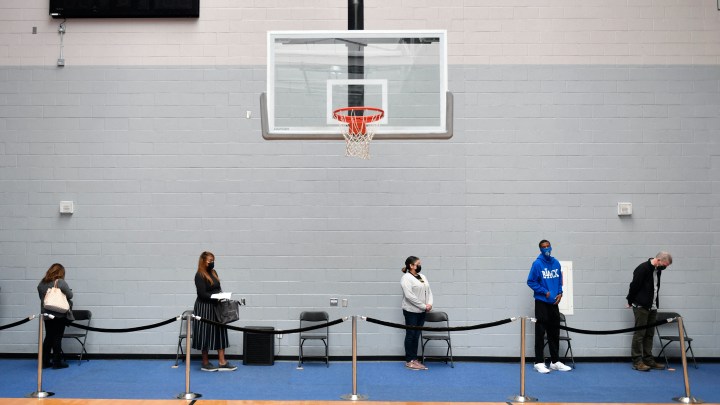 COPY
Education workers line up to receive a dose of the COVID-19 vaccine. Patrick T. Fallon/AFP via Getty Images

Education workers line up to receive a dose of the COVID-19 vaccine. Patrick T. Fallon/AFP via Getty Images
Listen Now

After almost a full year of distance learning, the Los Angeles Unified School District has announced an agreement with the teachers union to resume some in-person classes within the next six weeks as teachers get vaccinated.

The question of school reopenings around the country has gotten increasingly heated, often painted as a clash between stubborn teachers and fed-up parents. But it’s a lot more complicated than that.

According to a recent poll from the Pew Research Center, slightly more than half of Americans think schools should not reopen until teachers are vaccinated.

But views about reopening have shifted since last summer, said Juliana Horowitz, associate director of Research at Pew.

“Fewer now say that health concerns, the risks of teachers and students, should be a major factor,” she said. “Concerns about students falling behind academically are now more common.”

But, the survey found, those attitudes vary widely between groups. People of color, especially Black respondents, were most likely to be concerned about health risks and to support vaccinating teachers before opening schools.

“I think that’s a logical step,” said Tajh Sutton, an educator, author and youth advocate in Brooklyn. Sutton is also a mother of two children and has kept them home in remote classes “not because we don’t value academics, but because our children cannot learn if they are scared, they cannot learn if their teachers are sick. They cannot learn if there’s no space for them to grieve the loss and the death that has impacted communities for the past 12 months.”

She said the same historic inequities that have left the Black community vulnerable to COVID-19 have also left local schools without resources to ensure safety.

And yet, Caitlyn Collins, a sociologist at Washington University in St. Louis, said that “families of color and women of color are experiencing the disproportionate harms associated with school closures.”

Collins also pointed out that frontline workers are disproportionately people of color earning low wages, and school is often a critical caregiving resource for them.

But she said we should not be pitting the needs of children and parents against the safety of teachers.

“Prioritizing teachers and conceptualizing them as essential workers who should be at the front of the line for vaccines, in my mind, is a very logical way to think about school reopenings.”

At this point, at least 14 states have not prioritized teachers for vaccination as the Centers for Disease Control and Prevention recommended.