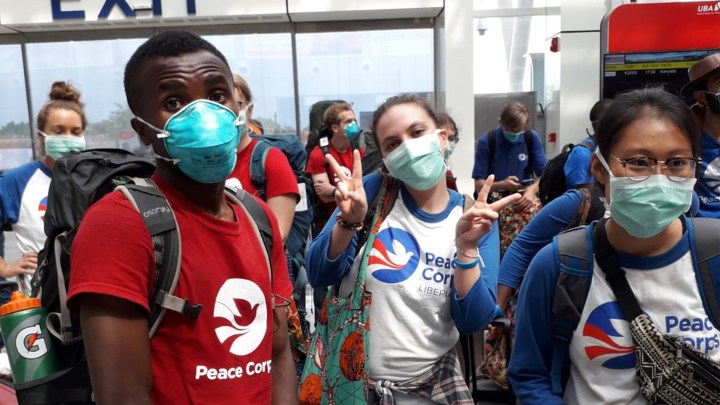 COPY
About 7,000 Peace Corps volunteers had their service cut short in mid-March due to the coronavirus pandemic. Courtesy of the Peace Corps
COVID-19

About 7,000 Peace Corps volunteers had their service cut short in mid-March due to the coronavirus pandemic. Courtesy of the Peace Corps
Listen Now

Among the millions of Americans whose lives have been upended by COVID-19 are the 7,000 who volunteer abroad through the Peace Corps.

A couple of months ago, 34-year-old Adam Greenberg and his partner were developing sustainable fish farms in central Africa. Then, on March 16, they got an email from the Peace Corps telling them to come home.

“Quite frankly, after learning about the chaos of airports and how it was accelerating in the United States, and the general unpreparedness that it looks like the United States was facing, we kind of thought we might actually be safer here in this rural village,” Greenberg said.

They considered staying in Zambia, which would have meant that they’d be completely on their own — no more per diem pay, no health care, nothing. But that wasn’t the deciding factor for Greenberg to come back to San Diego.

“After a very lengthy discussion all day about this, we decided, you know, we wouldn’t want to become a burden on Zambia’s infrastructure,” he said. “So we figured it would be the most responsible thing to return.”

Greenberg and his partner can’t wait to get back to Zambia, but the official word from the Peace Corps is it’ll be at least October before anyone can return to their service countries. He’s got enough money saved up to be alright for the next few months, but he said after that he’ll likely have to start looking for a temporary gig to pay the bills, which poses its own difficulties. In the past five weeks a staggering 26.5 million workers have filed jobless claims.

“It’s not the best job market to come back to,” said 23-year-old Stephanie Estrera, who was only six months from completing her two-year stint in southeast Asia when she was sent back to the U.S. She went from spending her days teaching kids and mentoring local teachers in the Philippines to looking for work in Boise, Idaho.

“I’ve also started researching just some local volunteer opportunities around the Boise area,” Estrera said. “So, next steps is it’s all kind of up in the air, but I feel like it’s like that for a lot of Americans.”

Right now, Estrera is living with her parents. Tim Feng is too, but his return home was a bit more complicated after he was forced to leave Thailand.

“I came back to the United States but both my parents are considered high risk so I had to quarantine myself for 14 days in a rental property that I had to pay for upfront,” Feng said.

He said the Peace Corps is working on reimbursing him for the rental, but paperwork is backed up. The Peace Corps also announced it would provide volunteers with a one-time $1,500 stipend to cover costs associated with the evacuations. That’s on top of money volunteers normally get when they conclude their service.

Like so many others, Feng would love to go back and finish up his service, but for now he’s left trying to figure out what’s next.

“I spent the last couple of days kind of reworking the resume, looking at different job opportunities, looking at a bunch of grad school opportunities and seeing what’s available out there. It’s just really tough right now for a lot of people,” Feng said.

Clint and Madeline Kellner returned to their home in March after only eight weeks volunteering with a nonprofit in Peru helping to empower women in the Amazon. They own a home in Novato, California, 30 miles north of San Francisco.

“We were really lucky we had a place to come back to and that made the transition back a whole lot easier,” Madeline Kellner said.

The Kellners are on the older end of the Peace Corps volunteer scale. She turned 67 in April and he turns 67 in August. It was their second stint in the Peace Corps after they quit their jobs in 2016 to volunteer. Madeline was the executive director of an agency that matched up caregivers with low income older adults and people with disabilities. Clint has a PhD in ecology and worked as a biological consultant. They’re fine for money and will seek more volunteer opportunities as soon as they can.

“We have, over our lives, been really good about saving so that we could have options of what we wanted to do. So, for us, Peace Corps wasn’t a major hardship,” Madeline Kellner said.

For those that are struggling, there’s a network of former Peace Corps volunteers trying to help current volunteers when and where they can. Some have offered places to stay, job opportunities and emotional support.

“For the volunteers there is disappointment, there is regret. And I think probably the biggest one is just the unknown,” said Kate Raftery, director of service innovation at the Peace Corps.

Peace Corps will determine country-by-country when it’s safe for volunteers to return. Raftery said a lot of that is out of their control — it depends on when those countries open their borders and begin accepting foreigners again. 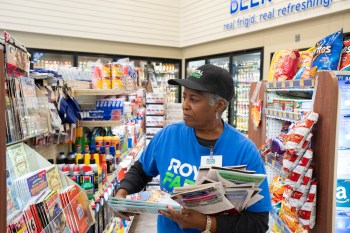 A senior citizen working through the pandemic