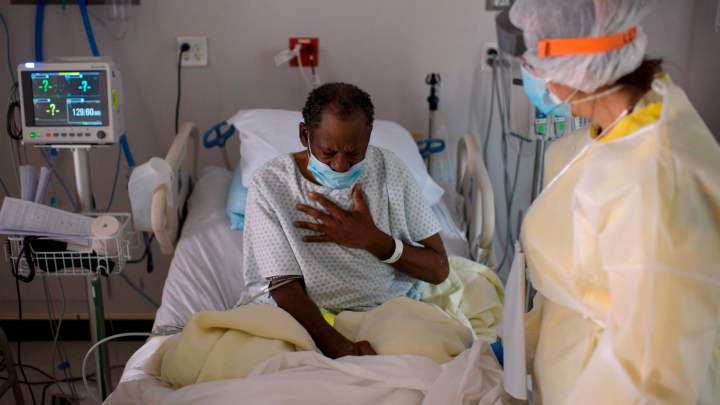 COPY
COVID-19 long-haulers experience symptoms from fatigue to heart problems after the virus is no longer detected in their bodies. Mark Felix/AFP via Getty Images
COVID-19

COVID-19 long-haulers experience symptoms from fatigue to heart problems after the virus is no longer detected in their bodies. Mark Felix/AFP via Getty Images
Listen Now

Over a year after getting COVID-19, Diana Berrent continues to be mystified by some of her symptoms — headaches and deep inner-ear pain.

“I’ve had so many MRI’s and CAT scans and so on and so forth, and I am no closer to any answers.”

That is about the same amount of Americans who have survived COVID-19. And for many, like Berrent, the ordeal is far from over. Physicians and scientists have varying estimates, but some say between 50% to 80% of patients continue to have symptoms three months after the onset of COVID-19 — even after tests no longer detect the virus.

Those symptoms range from fatigue to heart problems. Experts are warning that long COVID-19, as it’s being referred to, is going to require major changes to our disability system.

Berrent founded Survivor Corps, an organization that supports COVID-19 survivors. She said they have about 165,000 members.

“And so many of them are people in their 20s and 30s who are fitness instructors, college athletes, and six months after a mild case of COVID are in wheelchairs and on feeding tubes. Like, this is not a ‘post-viral malaise,'” she said.

Congress has allotted $1.15 billion for the National Institutes of Health to study long COVID-19 — how many people have it and why. Several states have also funded initiatives. New York City has its own aftercare program, which Dr. Amanda Johnson oversees. She estimates about 10% of COVID-19 patients are “long-haulers.”

And overwhelmingly, they’re worried about money.

“When they’re going to be able to get back to work. People are concerned about advocating for themselves to have some sort of graduated set of responsibilities. Being able to take breaks, being able to access paid sick leave, whether they should retire,” Johnson said. Especially, she said, since a lot of them are in essential jobs, where asking for more flexible workloads is not an option.

Going on disability is also a long shot. This is something that worries Rebecca Vallas at The Century Foundation.

“COVID-19 long-haulers appear to represent the largest influx of new entrants to the disability community that we’ve seen in modern history,” Vallas said. She used to be a disabilities lawyer, and she described applying for disability as a process that might as well require a law degree. “Unfortunately for the influx of COVID long-haulers, our federal disability system is designed to deny people,” she said.

In 2019, more than 60% of disability applicants were denied benefits.

And those who get it, Vallas added, have to wait five months before the assistance kicks in.

Disability rights lawyer Eve Hill is one of the lead organizers on the Stop the Wait Act, which would shorten the time between people being approved for assistance and receiving it.

Hill said making the disabilities system easier for long-haulers to navigate is key to the American economic recovery.

Diana Berrent of Survivor Corps pointed out that some of the major changes in disability rights in America came after World War II. The number of returning soldiers, many disabled, made it clear there needed to be an organized, national approach. She sees a parallel with long COVID-19.

“We’re talking about people who’ve been maimed, essentially, by this virus in a very short time span,” she said.

Many advocates say this pandemic has been like a war — one many people are still fighting.