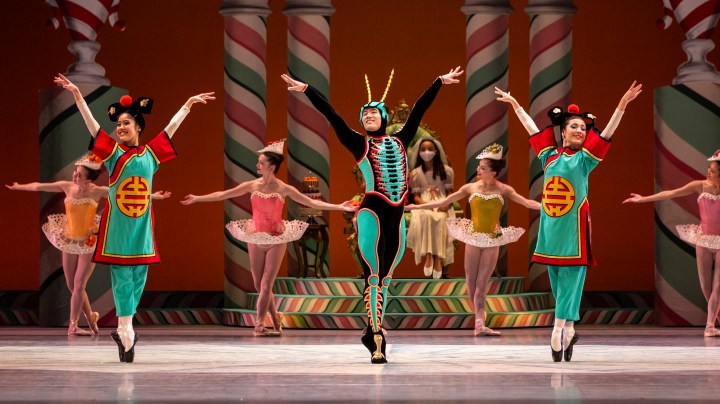 The second half of “The Nutcracker” takes place in the Land of Sweets, with an “It’s a Small World” hodgepodge of characters. There’s the Sugarplum Fairy, Marzipan and Tea — which in some versions is called Chinese. The choreography traditionally includes shuffling feet, bobbing heads and pointing fingers. And the costumes often involve Fu Manchu moustaches, exaggerated eye makeup and sometimes even yellowface.

Phil Chan is Chinese-American and remembers seeing “The Nutcracker” as a kid and telling his dad that he wanted to be in the ballet someday.

“And, you know, at the end of the show, he looks at me and he says, ‘Do you really wanna do this? That is all they will see you as. Do you really want to dedicate your time and your energy and your life to this?'”

Today, Chan is the co-founder of Final Bow for Yellowface, an organization working since 2017 to change outdated representations of Asians in ballet. His first mission has been helping companies revamp “The Nutcracker,” one of ballet’s best-known productions.

Like many arts institutions that rely on in-person performances, ballet companies have had a tough time during the pandemic. Many of them have started dancing again just in time for the annual moneymaker, “The Nutcracker,” which accounts for about half of companies’ annual box office sales. Safety precautions are a big priority at productions this year. But during a pandemic that’s led to an increase in violence against Asian Americans, there’s a strengthening call to change the way Chinese people are depicted in the ballet’s second act.

“We’re not trying to cancel ‘The Nutcracker.’ We’re trying to keep it alive for everybody,” Chan said. “Because if an audience comes and all they see is yellowface instead of the dancing, they will leave unsatisfied and they will miss the beauty of the dance.”

That’s the big worry, that these stereotypes will put off newer and younger audiences. Because “The Nutcracker” isn’t just the industry’s cash cow — it’s the gateway ballet.

“Our ability to attract people to future performances is really grounded in ‘The Nutcracker,'” said Ellen Walker, executive director of Pacific Northwest Ballet in Seattle.

Three-quarters of first-time ticket buyers come to see the company through “The Nutcracker.” And if they like what they see, they’ll often take a chance on other programming, another story ballet like “Swan Lake” or something more modern.

“And then that return often leads to another return, which often leads to a contribution to our annual fund. And that engagement continuum of building relationship with patrons,” said Walker. “‘Nutcracker’ is absolutely, critically important.”

This year the company worked with Final Bow for Yellowface to change the costumes in the Chinese section. The leading dancer is now a cricket, a symbol of good fortune in Chinese culture.

“It moved from caricature to a character that was not offensive and that was approached with respect,” Walker said. “And when that cricket jumps out of the box it is really, really exciting.”

There are also fans who believe in preservation and that changing choreography or costumes is like painting over a Van Gogh.

“They think history is static and to respect history you want authentic, the real thing,’ said Jennifer Fisher, a dance scholar and author of “Nutcracker Nation.” “But ballet technique and its portrayals have changed a lot over the years to appeal to different audiences, as well as just pushing the art form forward.”

Fisher said part of ballet’s appeal is that it evolves. That since its beginnings in the 15th century, skirts have gotten shorter and jumps and turns flashier — and that making ballet more inclusive is a similar step. She hopes companies look beyond “The Nutcracker” and reevaluate other classics that include problematic portrayals of Black and brown people.

Because it’s not just about selling more tickets but recruiting a more diverse set of students to become dancers, choreographers and directors. “It will be an exclusive form right until it dies if you don’t start talking to your current audiences,” Fisher said. 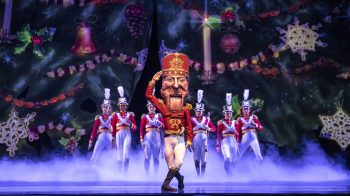 This holiday season, things are looking up for performing arts organizations