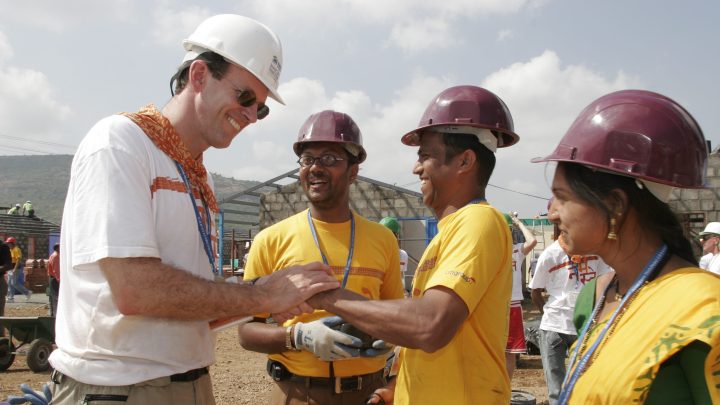 In his book “Our Better Angels: Seven Simple Virtues That Will Change Your Life and the World,” Habitat for Humanity International CEO Jonathan Reckford describes the lessons he’s learned from the many volunteers and homeowners he’s met through this work. The following is an excerpt from the book about building houses in India with former President Jimmy Carter. You can hear the full interview with “Marketplace” host Kai Ryssdal on the “Corner Office” podcast.

During a Jimmy and Rosalynn Carter Work Project, you learn to move quickly, work hard, and expect anything, or so I was told. But in the summer of 2006, I was on my very first Carter Project building blitz, and let’s just say nothing could have prepared me for it.

The location chosen for the project, near the town of Lonavala in western India, happened to be very near where President Carter’s mother, known as Miss Lillian, had been stationed in 1966 for two years in the Peace Corps—at the age of sixty-eight—so from the start there was a sense of connection to the place for President and Mrs. Carter, and expectations for a successful week were high for all of us.

The Carters, their Secret Service detail, Habitat head of communications Chris Clarke, and I arrived at the guest- house where we would be staying for the week. Arun, the manager, greeted us warmly. He implored the Carters to let him know if they needed anything at all. He wanted everything to be right for them.

Once we had settled into our rooms and then reconvened in the foyer of the house, Arun heard us discussing the build. He had never heard of Habitat, and he asked us what exactly we were going to be doing. I told him that we and two thousand other volunteers from around the world, including CEOs from several high-profile Indian corporations, were going to be building fifty duplexes—one hundred homes—with low-income families.

Arun spoke perfect English, but he couldn’t understand what I was saying.

“You? And President Carter? You’re supervising this work?”

“No,” I explained, “we’re actually building the walls and putting on the roofs.” I motioned my hand as if hammering an invisible nail.

“You don’t have workers?”

“We are the workers. And we work alongside the people who are going to be living in the homes.”

He looked hard at us, and I could only guess what in his imagination the families looked like. In his world, those people and President Carter and the rest of us relatively well-to-do foreigners must have made very strange partners indeed.

“But why are you doing this?”

“It’s what Habitat does. We help people banks typically don’t lend to get an affordable loan so they can buy a home that’s safe and clean. In fact, with these families, it’s the women who scrimped and saved to come up with down payments. They’ll be the ones purchasing the homes.”

“And what do you get in return?”

I wanted to say, “Nothing . . . and everything,” but I wasn’t sure how to put that into words for this very nice man struggling to understand.

“We get to help families move into nice homes so they can be healthy and have a better life.”

At the opening ceremony of the build week, the Carters were greeted with all the camera flashes and thrilled applause and yells of a crowd welcoming movie stars arriving at the Oscars. The volunteers had come from literally all over the world to help—thirty nations in all, I believe— and the inspiration of President and Mrs. Carter was a huge reason why for a lot of them.

Not all the families we were building with knew exactly who the Carters were, but they understood they were “important people,” and thus their presence was auspicious for the occasion. But these honored guests didn’t carry themselves the way the families expected. These VIPs were wearing their own hard hats and tool belts, ready to work.

The first day was a chaotic celebration. Music blared loudly from huge speakers. Dancers performed elaborate routines. Family members placed orange and yellow marigold garlands around the necks of the volunteers and smudged bright red tilaka marks on their foreheads, Hindu traditions to welcome and honor their guests. They also passed around coconuts, considered God’s fruit, as an offering and to ask for God’s blessing for the new homes. The volunteers were beaming with the energy and activity. Their eyes were wide open, taking it all in. Many of them had come thousands and thousands of miles to be here. They were eager to start working.

Habitat had (and continues to have) support from several Indian and India-based global corporations. CEOs and other representatives from these firms were on hand to participate in the welcoming and the opening ceremonies. They were all for supporting the movement to help low-income families get better housing. What they hadn’t realized was that they might want to help with the construction itself, alongside the families.

At first, some of them watched the goings-on with curiosity. They weren’t necessarily against doing the work. They just didn’t understand the concept. It was hot—I mean, blazing hot—that day. Their confusion was all over their faces. Their clothes were expensive and clean. Their shoes were polished. Their hands were used to signing contracts, not spreading mortar or pushing a wheelbarrow. For a while they watched, maybe not in horror but certainly in surprise.

Seeing President Carter, their honored guest, getting down to work in his blue jeans, however, they could hardly sit idle. They still weren’t convinced this project was operating as it should be, but they were willing to join the crowd, if only to save face.

When Rakesh Chitkara, an executive with Dow Chemical India at the time, arrived on the site, he’d assumed it would be more like a photo opportunity for President Carter and the other dignitaries, but when he saw how hard these VIPs were working, he and the other Dow associates who’d come to volunteer jumped right in. They were all surprised by how much fun they had working together, building together as a team.

There was one more thing that would stick with him and his colleagues—the humbling effect of inexperienced upper-income volunteers having to rely on skilled laborers for help. By the end of their first day in this upside-down hierarchy, the volunteers had a new respect for the laborers. Rakesh and the other Dow volunteers went home that night exhausted. Had they actually had fun toiling in the sun? What project might they take on next?

Something I heard President Carter say on that trip in India, and have heard him say many times since, is that one of the things he appreciates most about Habitat is that it provides the opportunity for people of different faiths and income levels to come face-to-face and learn, over the course of several days working side by side on a Habitat build site, that they have so much more in common than they would have ever imagined. They share strong values, have a deep love for their family and their community, and aren’t afraid of hard work. For first-time volunteers, it’s an eye-opening experience. It certainly was for many of the volunteers in Lonavala.

Excerpted from “Our Better Angels” by Jonathan Reckford. Copyright © 2019 by the author and reprinted by permission of St. Martin’s Publishing Group.