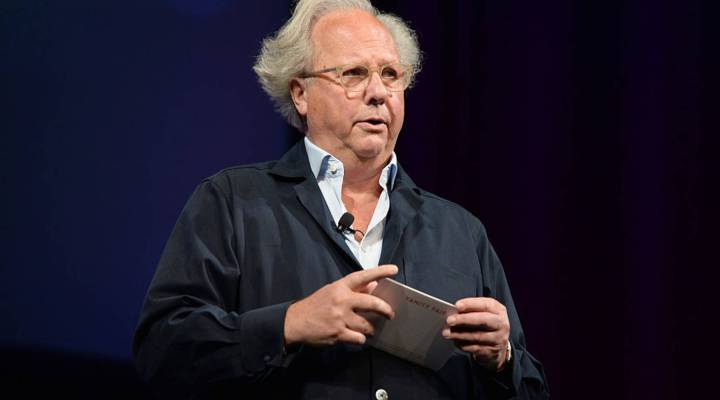 President Donald Trump’s Twitter feed is many things: It’s distracting, it’s self-aggrandizing, it’s unpredictable. And it can have economic consequences, but maybe not so much anymore, as corporate America has learned to not fear the tweets.

But early on the morning of Dec. 15 last year, the then-president elect tweeted this:

Has anyone looked at the really poor numbers of @VanityFair Magazine. Way down, big trouble, dead! Graydon Carter, no talent, will be out!

Graydon Carter, the editor of Vanity Fair magazine, is in fact out, though not because of anything the president said. Carter has a wall full of Trump tweets hung outside his office on the 41st floor of One World Trade Center in New York. Host Kai Ryssdal met with Carter at his office for an exit interview. Below is an edited transcript of their conversation.

Kai Ryssdal: You said once that any editor is a big gamble. So what I want to know is why in 1992 did [Advance Publications co-owner] Si Newhouse gamble on you for this magazine?

Graydon Carter: He had, I think he’d been an admirer of Spy magazine. And I’d been the editor of The New York Observer between Spy and here. And after about six months, the paper was going the way I wanted it to, I started sending it out to friends, other editors on sort of as a comp list. And Si makes a twice-yearly trip to visit his European holdings. And sort of went on this one trip in 1992. Everywhere he went, he saw a copy of The New York Observer on people’s desks, and he thought, “My God, Graydon’s got everybody reading this now.” And so he came back and asked me to come over to his apartment and offered me the job. He offered me one of two jobs: “The New Yorker” or “Vanity Fair.”

Ryssdal: You were, as I read the history, more excited about The New Yorker initially.

Carter: Well, we’d been making fun of Vanity Fair for the past five years at Spy, so I figured The New Yorker would be an easier fit.

Ryssdal: Well, I’m sure you appreciate the irony now of after all these years poking celebrities and the establishment in the eye, you’re “the man.”

Ryssdal: You are the establishment.

Ryssdal: Soon to be former “man.”

Carter: No, I’d probably be the sort of person that we’d be writing about at “Spy” magazine, and I realize that.

Ryssdal: Was it fun for you initially in this job?

Carter: No, it was brutal because of five years of making fun of some members of the staff and some of the writers. You know everything sort of came together at the end of the second year, and I was trying to tell people, “Don’t confuse politeness with weakness.” And you know, I was pretty strong there in that period but I wouldn’t let my children come to the office. It was such a poisonous atmosphere.

Ryssdal: That’s interesting because you — and granted that I’ve only had a few personal exchanges with you — but you strike me as a very polite, kind, a nice guy.

Carter: And a Canadian.

Ryssdal: Well, there’s that. Twenty-five years ago, maybe not so much, taking over this job?

Carter: No, I was the same person exactly. Just probably a little more unsure of myself. And, you know, I had four kids at that point. And I had mouths to feed and school to pay for. So I was terrified of losing this job.

Ryssdal: You have — as is your job, I suppose — worked hard at the Vanity Fair brand. Whether it’s the Oscars party. … It’s all about the brand isn’t it?

Carter: Well, we don’t like to use that word. But, yes. It didn’t start there. They’re all sort of organic outgrowths. You know, I’d gone to Swifty Lazar’s last party in Hollywood where they watch the Oscars and then the people come after. And after he died, I thought this would be a good thing for the magazine to do a small version of this. And so we started off really small, because I preferred to fail in those smaller quarters rather than larger quarters. And it turned out OK, and we just sort of grew each year.

Ryssdal: It turned out OK? It’s the party now, come on.

Ryssdal: To what degree are you responsible — you in this job — for the rise of celebrity culture in this country?

Carter: That started long before I got here, and it started with the birth of People magazine probably.

Ryssdal: Yeah, but it’s exploded, right, the past 25 years?

Carter: It has. But you know, the thing is, those people that we call celebrities — the reality TV stars — you’ll never, ever see their names in Vanity Fair.

Ryssdal: Other than Donald Trump, by the way.

Ryssdal: Talk to me for a second about the magazine industry writ large. Not the greatest of times right now as the industry tries to figure out what’s happening. What’s your sense?

Carter: Well, you know, it’s been going on since the recession that the two forces — first of all, the newsstands disappeared. I don’t know if you noticed. You know, there used to be a newsstand on every major corner in New York, and now most of us wouldn’t know where to find the magazine near this building. That happened, and so circulation went down and at the same time you had a crunch on the advertising market as advertisers discovered the internet. But I think that is a false economy or false direction for them because basically nothing sells a product better than a beautiful page in a magazine. It creates demand for that product. The internet helps you buy that product. They’re different functions.

Ryssdal: Do you pick the covers?

Ryssdal: What do I know, I’m a radio guy.

Carter: Do you pick the radios that this goes out on?

Ryssdal: Actually not, but that’s a whole different thing. You’ve basically gotten up every day for 25 years and done the same job.

Carter: Yeah, and I really loved every single one of them. I still love this job.

Ryssdal: What was the reaction when you said you’re leaving then?

Carter: Well, some of them suspected, because I was originally going to leave in April. But after the election I thought, “I’ve got to stick around for the first year of this.” This will be my my eighth administration since I’ve been here.

Ryssdal: But you have been engaged with this one as few before, right? And this goes back to the Spy magazine days?

Ryssdal: Why then are you leaving when you are so engaged with this president and what he is doing?

Carter: I’m not leaving. I’m going to come back. But just come back in a different form.

Ryssdal: Are you going to keep writing about him?

Carter: If somebody offers me a job, yeah.

Ryssdal: Yeah, I’m pretty sure you can get a writing gig here if you want.

Carter: Yeah, maybe I can, I don’t know. But I’ll keep doing something about him. It’s just too perilous. I just never used to check my news feed 15 times a day, just checking to make sure we’re not at war with somebody right now.

Ryssdal: Are you going to miss it?

Carter: I’ll miss the people. But we’ll stay in touch. And there will be aspects of the job, yes, I’ll miss. And I’d like to get away and have a life of no deadlines for six months, because after 9,200 days of deadlines, it would be nice just to kick around a bit. I don’t want to stay around past my “sell by” date either. I don’t know what my “sell by” date is, but it’s probably stamped on me somewhere, and it’s coming up.