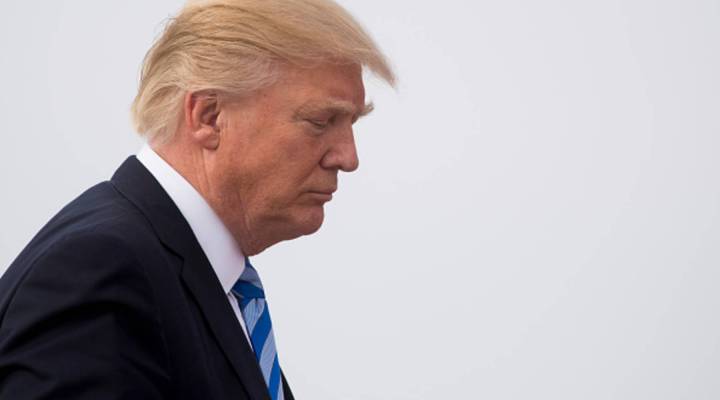 April 29 marks President Trump’s first 100 days in office. His tenure so far has been marked by executive orders on immigration, efforts to repeal Obamacare and a pledge to “hire American,” among many other things. So, how’s Trump doing?

During election season, we spoke to three mayors from very different cities across the country, and after Trump took office, we visited each of them: Dennis Mock in Dalton, Georgia; Louise Carter-King in Gillette, Wyoming; and Biff Traber in Corvallis, Oregon.

The three mayors and the cities they represent see the president differently. In Gillette, Trump’s attitude toward energy — and crucially, coal — is a welcome change. Louise Carter-King said her constituents, who voted heavily for Trump, have been happy with his first 100 days.

“Everyone is still optimistic,” Carter-King said, “people here are pretty happy with some of his appointments to his cabinet. They felt that they were pretty pro-energy, and, of course, we are the energy capital of the United States.”

Dennis Mock, of Dalton, the largest producer of carpet and flooring in the U.S., agreed.

“Our industry is picking up, people are back at work and the economy seems to be moving very well here,” he said. “The whole general atmosphere here is pretty upbeat.”

Dalton also cast a majority of its votes for Trump, but the city’s political lines are less clearly drawn than Gillette’s — Dalton is 48 percent Latino, and many of Mock’s Latino constituents have expressed concern about the president’s immigration policies, especially since the city is so close to a major detention center working closely with U.S. Immigration and Customs Enforcement, or ICE.

Mock said that many of his Latino constituents are looking for clarity and certainty. And Biff Traber said that Corvallis residents feel the same way.

“There’s a trepidation, waiting to understand what is really going to occur out of President Trump’s promises,” Traber said. “There’s serious concern about impacts of climate change and immigration enforcement.”

Corvallis is a typical college town and a sanctuary city in a very blue state. Traber’s constituents are more concerned with buffering their city from presidential policy and less optimistic that the current administration will improve local industry.

Still, the mayors have some common ground: They all work, or have worked, in business. Like Trump, they have applied their business acumen to the job.

Louise Carter-King and Biff Traber have worked to consolidate departments and save money during their time in office. And all three mayors have hit roadblocks as they figured out that sometimes government presents more hurdles than business.

Still, Carter-King is hoping that Trump is able to help things run more smoothly, or at least more quickly.

“Trump has talked about easing the permitting process for infrastructure projects,” she said, “and I think that’s something that could help the government work a little more efficiently in real life … business can’t wait that long. You’ve got to move at the speed of business, not government.”

Mock is looking forward to ease of business, too. “Deregulation … is freeing up a lot of the constraints of moving forward with businesses,” Mock said, “it’s going to be really important.”

But Traber has a warning, and a less positive outlook: “I would just add one caution, to remember 2007, 2008, 2009, where the result of deregulation of one industry was the Great Recession …we need to be very cautious about how deregulated we’re making things.”

To listen to the conversation, click on the media player above.