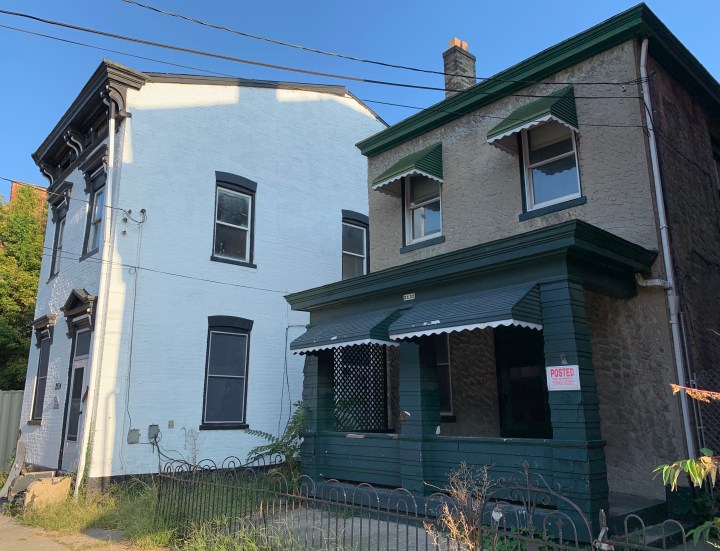 COPY
Habitat for Humanity bought these houses to renovate for families in Lower Price Hill. Amy Scott/Marketplace
One School, One Year

On a quiet street in Cincinnati, Steven Stanley sat on the front porch of a small, beige house with white trim, remembering the first day he moved in.

“I have tears, because that was the best day of my life and the kids’,” Stanley, 34, said. “It was relief off of them and relief off of me.”

Relief, because this was their home. That had seemed impossible just four years earlier, when Stanley was living on Social Security disability insurance benefits and food stamps, renting a rundown house with a sewage leak.

“It was unsafe because of all the violence going on,” he said. “The house was not very taken care of.”

Then his landlord sold the house, and the new owner gave the family a month to get out. Stanley did what many in the community would — he went to the neighborhood school for help.

Oyler School is known as a community learning center, with a philosophy that a school can only succeed if its surrounding neighborhood succeeds. To help fight the widespread poverty in its neighborhood, the school provides wraparound health and social services for students and their families. Oyler had a connection with Habitat for Humanity, which was building new houses a couple miles away. Before Stanley knew it, he and many Oyler staff members were spending every Saturday working on his future home.

“The most exciting thing about the whole Habitat program is that you can work on your own house that you will be living in for the rest of your life,” he said. “I learned a lot of stuff, like painting, plumbing, drywall, all that.”

Stanley moved in three years ago, paying $350 a month on a zero-interest mortgage. His success prompted Oyler to partner with Habitat in the school’s own neighborhood, Lower Price Hill. The group has bought seven abandoned houses there so far — including the one Stanley was kicked out of — to sell to local families. The plan is expected to double the homeownership rate in Lower Price Hill.

The partnership is part of a larger effort in Lower Price Hill to provide stable, affordable housing. Research has shown that every time children move, they can fall months behind in school.

“We have a lot of kids that are moving two, three, four times a year, after eviction after eviction, and you can imagine what that’s doing to their educational progress,” said Ed Lee, president of Habitat for Humanity Greater Cincinnati. “Knowing that you’re the owner and you’re not going to be evicted because of change in ownership or the will or whim of a landlord — that creates a stability for that family that is unparalleled.”

“I think he feels happier,” she said. “It’s just kind of nice that he’s been able to have that stable family home.”

It’s also made a difference for his father. Not long after the dedication ceremony for the new house, Stanley decided to make another big change.

He wanted to be able to take his kids to Kings Island, an amusement park outside Cincinnati. Again, with help from Oyler, Stanley took classes to become a security guard and now has a full-time job at the school.

“It feels so great,” he said. “I can pay the bills and everything else without extra help.”