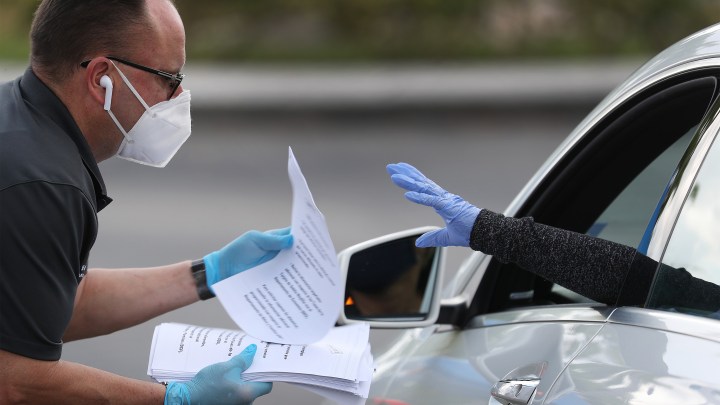 We now know that more than 30 million people have filed for unemployment across the United States since early March. That’s roughly one in five people who had a job back in February, before the COVID-19 pandemic hit and closed most of the economy down.

That translates to a lot of people with no income anymore — except what they might be able to get in new federal pandemic unemployment benefits. The benefits are pretty generous ($600 a week through July), but we also know a lot of people aren’t getting through to apply or aren’t eligible.

Now, this jump in jobless claims is a big change. The unemployment rate was 3.5% in February, and the Labor Department reported that it went up to 4.4% in March. Next week, we’ll get the number for April — which is almost surely going to way undershoot how much unemployment there really is in this economy now.

I asked several economists how high they think unemployment is right now. The average: around 20%.

But, the official unemployment rate for April, called the U-3, will likely be significantly lower — in part because it won’t capture a lot of people who aren’t working because of the pandemic.

“I finally got through to the Oklahoma Unemployment Commission, and so I’m kind of on hold with them right now,” Forrester said. He took my call while a state worker checked on his appeal for jobless benefits.

Forrester is out of work and has no income. But he wouldn’t be counted as “unemployed” by the Labor Department because he’s not “actively looking for work.”

He had a job lined up with the Census Bureau, but it’s been put on hold.

“There’s really not a lot of jobs out there available right now. That’s what I’ve been doing — just basically cooling my heels,” Forrester said.

So what’s a better measure of unemployment? Bill Rodgers, a former chief economist at the Labor Department who currently teaches at Rutgers University, suggests the “labor force participation rate.”

“It’s the share of the civilian [noninstitutional] population that is either working, or they say that they’re actually searching for a job,” Rodgers explained.

A sharp decline in labor force participation will show the true scale of employment loss, he said.

“It’s actually capturing people who may have gotten discouraged because there aren’t jobs in the world of COVID,” Rodgers said. “They’re worried that if they work, they can get sick.”

The Congressional Budget Office predicts labor force Participation will fall from 63.2% in the first quarter of 2020 to 59.8% in the third quarter. That would be lower than the trough after the Great Recession, which fell to 62.4% in September 2015, and the lowest since the early 1970s.

The hope is that as people return to work, participation will start rising again. But there are signs of unease among American workers. Bankrate’s Mark Hamrick cites a recent survey where “57% are moderately to extremely concerned about their job security.”

And Rodgers points out that those least likely to go back to work soon — or have employers to go back to — work in low-paid, high-contact sectors like restaurants, hotels, preschools and nail and hair salons.