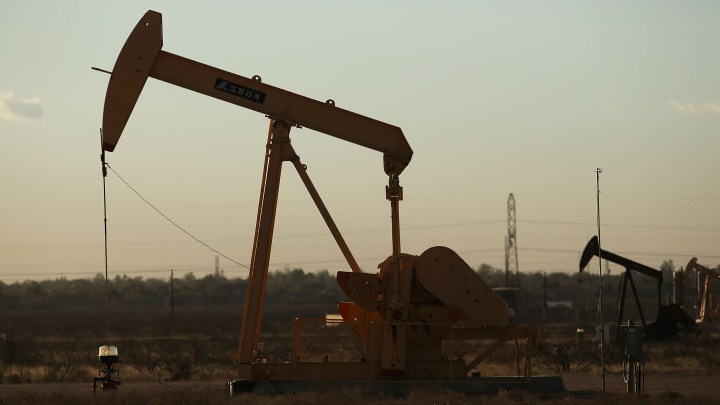 COPY
A pumpjack in Midland. The Texas oil patch has never seen a bust like this one.
COVID-19

A pumpjack in Midland. The Texas oil patch has never seen a bust like this one.
Listen Now

Midland, Texas, is ground zero for oil and gas production in the U.S., and much of the local economy, in some way or another, is tied to the industry. When West Texas Intermediate went negative for the first time ever on Monday, everybody in Midland felt it — on top of the coronavirus.

This morning at about 7 o’clock, Keith Dial went to his local Albertson’s to pick up groceries. He said there were about 25 people there stocking up. Dial grew up in Midland and has been through a number of booms and busts.

“I’m guessing we’ll have an unemployment number locally that could be well above 35%,” he said.

Dial is a partner in a Doubletree hotel in downtown Midland. He said the hotel has already furloughed most of the staff — about 80 people — because occupancy rates have plummeted.

He said most of the people renting rooms during the week were tied to oil and gas — people working on rigs or executives in Midland to discuss finances.

David Blackketter said his firm often has conversations about what to do if the bottom falls out on the price of oil, but nobody was prepared for Monday’s dip into negative numbers. He’s vice president of acquisitions and divestitures for Texas Standard Oil.

He grew up in Midland, too, and said this bust is unlike any he’s seen. When the market gets out of whack due to an oversupply, oil companies normally adjust by cutting costs.

“But the coronavirus shutting down demand for oil, you can’t cut your way to happiness,” Blackketter said.

Companies in the services industry — Halliburton, Baker Hughes and the like — have been hit the hardest because producers are shutting down wells as fast as they can, Blackketter said.

A lot of those contractors are leaving town. That’s bad news for guys like Ray Blanchard, owner of Bean and Grape, a coffee and wine bar in Midland.

“You know, what can we do? Where can we get revenue coming in?” Blanchard said.

They’re offering meat and cheese boards to go and selling wine at retail prices now to compete with grocery and liquor stores. He said nobody is paying to have an experience anymore.