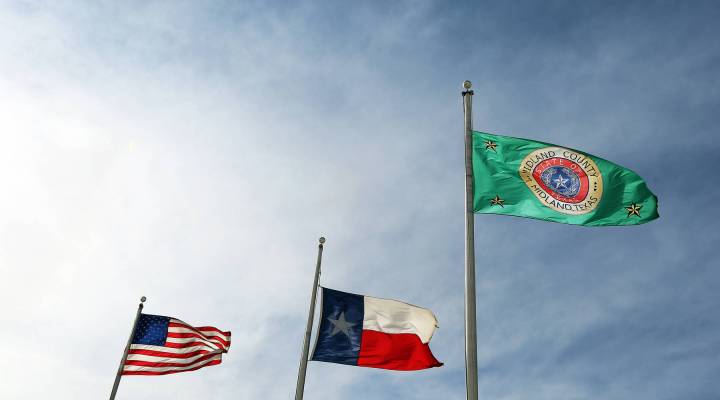 Torrance Neal cleans rooms at the Doubletree hotel in downtown Midland, Texas, but he considers it a side gig.

“This is my part-time job,” Neal explained while on a break in the hotel lobby. “My night job is more my full-time job because I’m the operations manager for a cleaning company.”

He said right now, business is ticking along at a good clip, thanks to high oil prices. Midland is in the Permian Basin in West Texas, where a lot oil is produced. And oil prices are soaring right now, to the point of prompting President Donald Trump to accuse OPEC of manipulating the price of a barrel. Whatever the cause, it’s great news for Midland. The median household income in the area is consistently among the highest in the country at almost $70,000. But that doesn’t mean everyone is rich.

Sure, high oil prices mean people can afford to hire folks like Neal, and the hotels are packed full of oil workers and executives. It’s great to have work, he said, but it’s not like he and his friends are all living high on the hog.

“Some people are still struggling,” he said. For people working lower-end jobs, he said the boost in oil price doesn’t mean much. “They might give them a 50 cent raise, but it really don’t help, especially with the housing going up.”

Neal lives in a two-bedroom apartment on the south side of Midland. It’s subsidized accommodation, and he qualifies because he makes less than $31,700 a year. His uncle earns much less at a fast food joint down the road.

Nine dollars an hour is a far cry from what the people staying in the hotel Neal is cleaning are pulling down. Entry-level salaries on some oil rigs start at $120,000. And that’s nothing compared to most oil executives.

Myra McKinley, a realtor in Midland, often deals with high rollers in her line of work.

“They have so much money that they fly, private, to wherever it is they want to go,” and their attitude, she said, is clear in how they spend their time away from the office.

“’If I want to go have a nice golf weekend, then I’m going to go run off to Escondido,'” she said. “‘Or if I want to have some great meals, maybe I’ll just go ahead and fly over to Las Vegas. Guess what? We make enough money right now that we can do that, so why not?’”

There’s a Salvation Army shelter just two blocks south of that hotel where Neal cleans rooms. Barry Lee, a 56-year-old on a fixed income, had just eaten lunch there. He said if you need help in Midland, you can get it.

“Oh, yeah, there are lots of places,” he said. “Salvation Army, Baptist Crisis, Presbyterian Churches. All the churches and stuff.”

Kat Hernandez, the lead social worker at the Salvation Army, has a less optimistic take.

“Midland has only one homeless shelter, which is us,” she said.

The Salvation Army shelter can house some 20 people each night, according to Hernandez. At last count, there were 264 homeless people in Midland.

But the tent community Lee was referencing is now gone. City law enforcement had told the campers they had to move on. In a town that benefits from high oil prices and suffers from higher housing costs, more folks are left looking for somewhere to lay their heads.