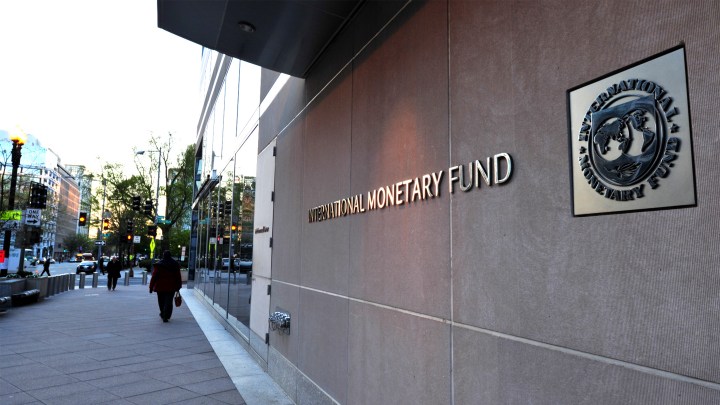 COPY
Forecasts could change dramatically based on policy decisions made around the global COVID-19 pandemic. Karen Bleier/AFP via Getty Images
COVID-19

Forecasts could change dramatically based on policy decisions made around the global COVID-19 pandemic. Karen Bleier/AFP via Getty Images
Listen Now

The International Monetary Fund issued its 2020 World Economic Outlook Tuesday, and it is grim. The IMF says we’re on the brink of the worst economic downturn since the Great Depression. There’s lots of uncertainty; everything depends on the trajectory of the coronavirus.

The organization predicts the global economy will shrink by 3% this year and that the world’s economic output will plummet $9 trillion over two years. How does it know this? It doesn’t actually know for sure.

“This is one of the hardest forecasting jobs we’ve had to do,” said Gita Gopinath, the IMF’s chief economist and author of the report. Even she acknowledges it could be wrong. Gopinath has never seen anything like this. She said she had to improvise.

“We spent a lot of time talking to epidemiologists and public health officials,” Gopinath said. “That’s not something we’ve ever done in the past. In that sense it’s very different, this time around.”

Gopinath also factored in how social distancing is affecting businesses like restaurants, movie theaters and stores, and the countries that rely most on those sectors. She looked at who has the best healthcare systems and what each country is doing to prop up its economy. And she’s baked in uncertainty — she expects to revise her report. Gregory Daco, the chief U.S. economist at Oxford Economics said that’s no surprise.

“We’re looking at forecasts that may change dramatically over the course of a day, or even an hour, based on a policy decision,” Daco said.

The IMF forecast could be downgraded. The report already says if the pandemic doesn’t recede in the second half of this year, global economic growth will shrink by 6%.