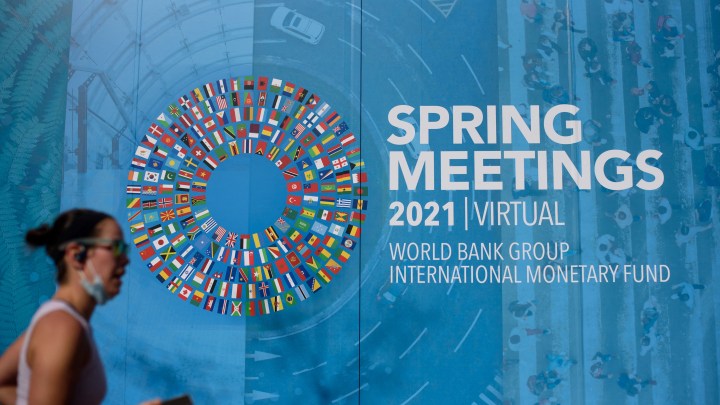 The International Monetary Fund is projecting global growth of 6% in 2021, it said in an updated World Economic Outlook released Tuesday.

The projected growth is higher than the IMF last predicted — 5.5% in January. That is due, in large part, to financial stimulus from governments, said Gita Gopinath, chief economist at the IMF.

“Additional fiscal support in large economies, particularly the United States, has further improved the outlook,” Gopinath said at a press conference Tuesday. The $1.9 trillion American Rescue Plan put in place last month helped upgrade the global financial institution’s assessment of the American economy. The IMF is now projecting 6.4% growth in the U.S. in 2021 and 3.5% growth in 2022.

“This makes the United States the only large economy projected to surpass the level of GDP it was forecast to have in 2022 in the absence of this pandemic,” she said. In the last several years, annual GDP in the U.S. has been around 2%.

But the headline 6% number does not apply to all countries. Gopinath warned that “recoveries are also diverging dangerously across and within countries as economies with slower vaccine rollout, more limited policy support and [that are] more reliant on tourism do less well.”

The IMF is projecting “low-income developing countries” will grow at 4.3% in 2021.

The upgraded projection for global growth is mainly due to an upgrade in projected growth for advanced economies — particularly due to a sizable upgrade in the U.S.’s growth, Gopinath said.

While there was a historic global contraction of -3.3% in 2020, Gopinath said, the financial collapse could have been three times worse if there had not been swift policy action and financial support. Because the worst was averted, medium-term losses are expected to be smaller, though still substantial, than after the 2008 global financial crisis.

“However, unlike after the 2008 crisis, this time, it is emerging markets and low-income countries that are expected to suffer the greatest scarring, given their more limited policy space,” Gopinath said.

Divergent recoveries are likely to increase gaps in standards of living, she said. An additional 95 million people are estimated to have entered into the rank of “extreme poor” — defined as making less than $1.90 per day — in 2020, Gopinath said.

A tailored policy approach is needed as economies recover at different speeds, she said.

“Right now, the emphasis should be on escaping the health crisis by prioritizing health care spending on vaccinations, treatments [and] health care infrastructure,” Gopinath said. “Fiscal support should be well-targeted to affected households and firms. And monetary policy should remain accommodative while proactively addressing financial stability risks.”