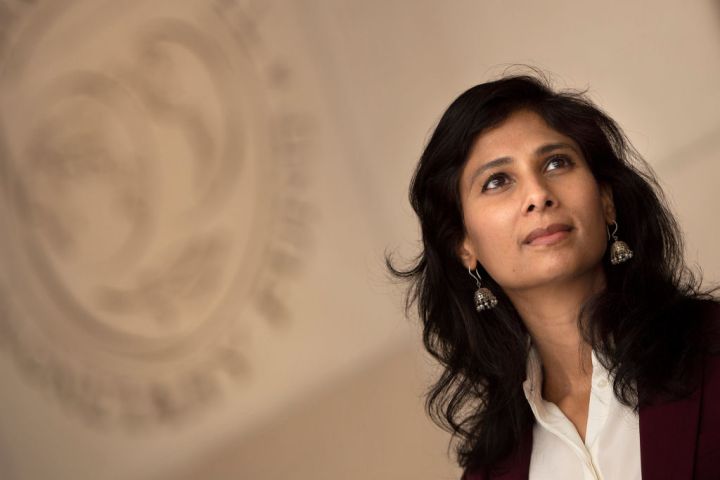 COPY
"We have a small upgrade of .3%," says IMF chief economist Gita Gopinath about the latest World Economic Outlook. "But there is tremendous uncertainty because we have a mutating virus. And we are in this race with vaccinations." Brendan Smialowski/AFP via Getty Images

"We have a small upgrade of .3%," says IMF chief economist Gita Gopinath about the latest World Economic Outlook. "But there is tremendous uncertainty because we have a mutating virus. And we are in this race with vaccinations." Brendan Smialowski/AFP via Getty Images
Listen Now

The International Monetary Fund has upgraded its economic forecast, predicting the global economy will grow by 5.5% this year, a slight increase from its previous forecast. But despite an improved outlook, what actually happens still depends on the economy. “Marketplace” host Kai Ryssdal spoke to Gita Gopinath, IMF chief economist, about the forecast and the future of the global economy. The following is an edited transcript of their conversation.

Kai Ryssdal: So, let’s get to the headline. This is an optimistic forecast. I think you could say the headlines are impressive, but I do want to ask you about the phrase with which you preface your announcement. And that is amid exceptional uncertainty. Is there a little trepidation here in your forecast?

Gita Gopinath: So Kai, I’m not sure I would say this is an optimistic forecast. We have a small upgrade of 0.3%. But that said, yes, there is tremendous uncertainty because we have a mutating virus. And we are in this race with vaccinations.

Ryssdal: On the idea of fiscal stimulus, I don’t want to get too bogged down in American politics, easy though that may be to do, but it’s pretty clear [President Joe Biden’s] $1.9 trillion plan is not going to go through as he certainly would intend. You talk here about worries that governments might move to austerity as they start thinking about how much money they’re spending. What’s your trepidation level there?

Gopinath: Well, our view is that we are still in the midst of this pandemic. So there is a need to provide effective and targeted support to struggling households and businesses. And also, in the case of the U.S., have more spending on rolling out the vaccinations at a much faster pace than what we’re seeing right now. So this is needed, and it has to be done in a targeted manner.

Ryssdal: Well, but what happens if that doesn’t happen?

Gopinath: Well, again, the details of this package are being worked out. And my hope is that some of it will happen.

Ryssdal: Let me turn to monetary policy. As you know, the U.S. Federal Reserve is meeting today and tomorrow. They are going to hold interest rates where they have been, which is bargain-basement low. Other central banks are doing the same thing. And you’re banking on central banks — pun, I suppose, not really intended — keeping interest rates extremely low through the duration of this forecast.

Gopinath: We expect central banks to keep interest rates low for a while. I mean, the question is, what are the risks associated with that? Is there a risk of inflation? The way we see it, inflation expectations are quite well anchored. But then there is, of course, the financial risks that could be building up. And we’ve been making the call for a lot more attention to that.

Ryssdal: Explain that a little bit, for for people listening.

Gopinath: We’ve seen fairly exuberant financial conditions, somewhat disconnected from the real economy, that there is some overvaluation in assets. And that’s something to pay close attention to.

Ryssdal: Economies are being allowed to run hot, that is to say, lots of fiscal stimulus, really low interest rates, because inflation is not a worry. I wonder, what your take is on that? It used to be that you let an economy run hot, and everybody said, ‘Oh, my goodness, terrible things are gonna happen. And now it’s kind of like, ‘meh.’

Gopinath: Oh, yes, I think some things were learned over the last decade. We had [the] U.S. unemployment rate go to 3.5%, which was, you know, a decade low, and still did not see much inflation pressure. We still have a labor market slack. That, including what we would describe as inflation expectations, which is a very important piece of this, is what makes one expect inflation to stay within the target.

Ryssdal: Yeah, and inflation expectations right now are extremely low. Last question, and then I’ll let you go, Dr. Gopinath. If we come to you in six months, what’s your sense of how you’re going to be feeling about the global economy?

Gopinath: Well, I hope that in these six months, we would have much greater success in ending this health crisis, much faster success, through a much more accelerated rollout of vaccinations. Not just in the countries that have gotten vaccines right now, but in poorer nations also. And if we do that, then I think we could come in six months to a point where the world economy is recovering strongly and on a more stable footing.

Ryssdal: You know, I lied. This is actually the last question. I say on this program all the time, the virus is the economy for this country, certainly. Is it fair to say that for the global economy, too?

Gopinath: Absolutely, I think that is right now very much the case.