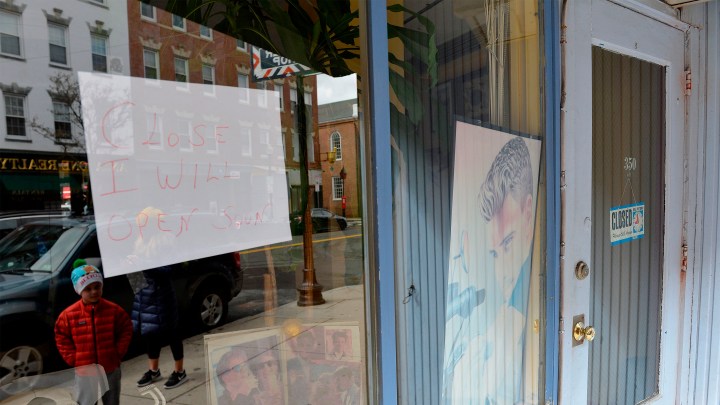 COPY
Unemployment benefits have been extended to self-employed people — like a barbershop owner in California — but the application is still confusing. Above, a closed barbershop in Boston. Joseph Prezioso/AFP via Getty Images
COVID-19

Unemployment benefits have been extended to self-employed people — like a barbershop owner in California — but the application is still confusing. Above, a closed barbershop in Boston. Joseph Prezioso/AFP via Getty Images
Listen Now

A record-busting 6.6 million people applied for unemployment benefits last week, but the true number of people out of work could be much bigger. It’s hard to get an accurate number because the system isn’t working great right now.

Under the new federal CARES Act, signed into law on March 27, more people than ever can qualify for unemployment benefits: gig workers, independent contractors and self-employed people. But state unemployment systems around the country are buckling under a flood of claims and confusion about who is eligible, and how they can apply.

Diane Swann has never applied for unemployment and never thought she’d have to, until a couple weeks ago when her state ordered “nonessential” businesses to close.

As an independent hairstylist in Oklahoma City, she doesn’t pay into the unemployment system, so she typically wouldn’t qualify for benefits. But she’d heard the new law would cover her, so she went online right away and applied.

“But I was denied because I’m self-employed, and I was a little baffled,” Swann said. She spent hours on the phone trying to sort it out with her state’s overloaded unemployment office and was eventually directed to send an email appeal.

In California, San Carlos barbershop owner Michelle Connolly got tripped up by the application itself. She wasn’t sure how to answer the first question asking for the employer listed in her last W-2. “And you can’t proceed without filling that out,” she said.

The problem is, she doesn’t get a W-2 because she’s also self-employed. So she just wrote down her own business as her last employer.

“I would advise that anyone who’s recently become unemployed and thinks that they will qualify for pandemic unemployment assistance to just wait until the state website says that they should apply,” Evermore said.

The California Employment Development Department, which processes unemployment claims, echoed that, saying it was still in the process of changing systems to comply with the new federal guidelines and that workers who think they now qualify should wait to apply until the system is updated.

But Jesse Rothstein, a professor of public policy and economics at UC Berkeley, said every barrier in this process could hurt.

“We definitely think that these challenges reduce the number of people who apply for benefits,” he said. “They make it harder, and they discourage some people from doing it.”

Even for those who do eventually get approved, the delays could have big consequences. Hairstylist Swann is already late on her mortgage and has other big bills looming.

“It is a lot of stress,” she said. “But as everybody says, we’re all in this together.”

She’s planning to apply again and hoping for the best.