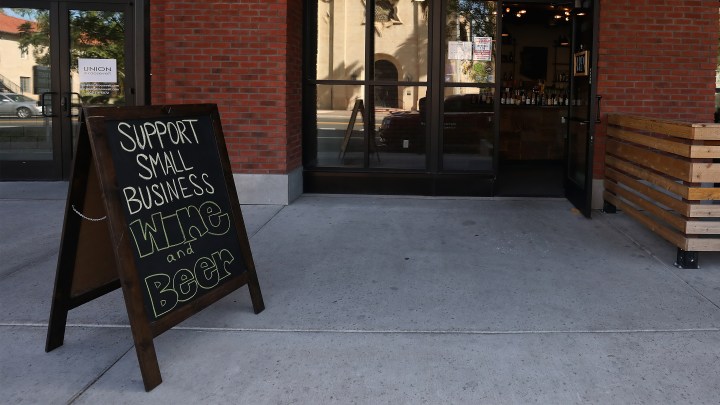 When the low-interest, federally guaranteed loans aimed at helping small companies launched last Friday, businesses had a hard time figuring out how to apply and banks had trouble getting instructions from the government.

By today, banks were forwarding approved loan applications to the SBA. But many businesses remained uncertain about when their loan checks would arrive — or whether they’d arrive at all.

Since then, the bank has passed along 41 approved loan applications, according to senior loan officer Chris Duncan, and they’ve all been assigned loan numbers by the SBA.

“Essentially, we’re being told that that is the approval from the SBA, the de-facto approval for the loan,” Duncan said.

But the bank can’t start handing out checks until it gets more guidance from the SBA on the details of the loan contracts it should use.

“The loan documentation, the actual promissory note that you might need to sign, what language does that need to have in it,” Duncan said. “Until we have that, we can’t produce the agreement that the bank and the borrower need to sign so that we can hand them their money.”

The bank has another 15 to 20 loan applications “on deck,” Duncan said, with more applications coming daily, and enough liquidity to fund 50 loans.

“Depending on the number and size of future loan requests — we’ve gotten four more this morning I haven’t had a chance to review — we could have a liquidity concern as the week goes on,” Duncan said. “This is where the Federal Reserve Bank program will be crucial to keeping the train moving on the right track. The Treasury will need to get that rolled out soon so banks don’t have to liquidate investments at a loss in order to fund PPP loans.”

Some small business owners are impatient with the delays. On Friday, a big bank approved an application from New York cocktail bar owner Ashwin Deshmukh. But he doesn’t expect to see any of the money until next week.

That uncertainty has him wondering whether he should apply to other financial institutions in the meantime.

“We just internally have to set a deadline by which we’ve got to hear back from our existing financial institution, or we have to start shopping more nimble and smaller options,” Deshmukh said.

Other businesses haven’t even gotten that far along in the process.

On Friday, John Resnick, owner of Proforma, a Boston-based marketing company, hadn’t heard back from his credit union about whether he could even apply for a loan.

“We were defeated,” he said.

“Now we’re just back in the waiting game,” Resnick said. “We’re back in the dark, but I’m confident it’ll figure itself out.”