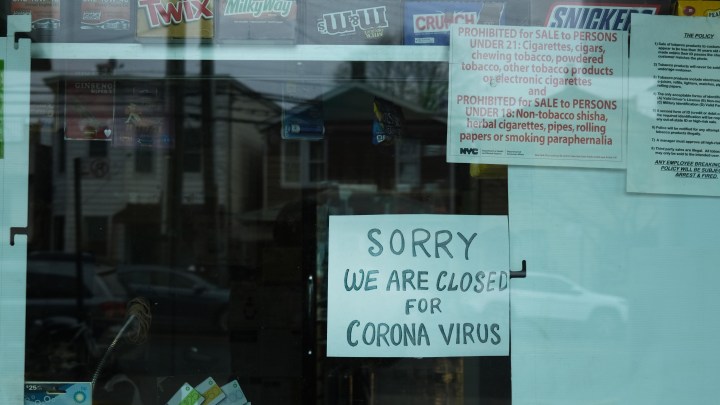 Friday was the first day of small businesses being able to apply for a slice of the $350 billion in the rescue package set aside for them. It’s loans — Paycheck Protection Program loans, to be precise — that businesses have to apply through banks to get.

It might sound straightforward, but so far the application process has been anything but.

Ashwin Deshmukh was on the phone all day Friday, starting at 8 a.m. ET, trying to figure out how to get one of these loans.

“I did not get any sleep last night,” Deshmukh said.

He owns a cocktail bar in lower Manhattan called Short Stories, which is closed right now. He said Friday the loan situation was in “full chaos mode” — banks either hadn’t opened the applications, or they hadn’t even figured out the details of the loan program yet.

“It’s kind of a race to find which institutions will actually do this, and to make sure you’re in line,” Deshmukh said.

In Boston, John Resnick was also calling banks. He owns the brand marketing company Proforma Printing & Promotion. Resnick did manage to reach someone at his local credit union, but “she basically indicated that they’re not able to do anything at this point, and has just put us in a queue of accounts to call back,” he said.

Banks themselves have had trouble getting in touch with the Small Business Administration, which is guaranteeing the loan program. Chris Duncan, a senior loan officer at LaSalle State Bank in Illinois, said his boss, the president of the bank, was on hold with the SBA hotline for 3 1/2 hours on Friday.

Early on Friday, Treasury Secretary Steven Mnuchin said nearly $2 billion worth of loans had already been processed. But by 12:30 p.m. ET, Deshmukh still hadn’t seen any of that money.

“I don’t know a single person who has gotten that, and it’s very hard to find people who have gotten that,” he said.

It’s not a problem that business owners necessarily blame the banks for, either. Alexandra Mason, who runs a marketing consultancy in Washington, D.C., said her community bank was not accepting small business loan applications on Friday.

“We’re still evaluating, but I feel a lot better, and I feel like we’ll be able to get at least a loan, if not today, then by the middle of next week,” he said.

He said the Paycheck Protection loan could help him reopen the cocktail bar for takeout and delivery while the crisis continues.