COPY
With the coronavirus closing many businesses, the Paycheck Protection Program saved millions of jobs that would have been lost, according to MIT research. Justin Sullivan/Getty Images
COVID-19

With the coronavirus closing many businesses, the Paycheck Protection Program saved millions of jobs that would have been lost, according to MIT research. Justin Sullivan/Getty Images
Listen Now

The House is weighing a new round of $320 billion in funding for the Paycheck Protection Program emergency loans for small businesses after the Senate approved the measure on Tuesday.

The first round ran out of its $350 billion appropriation last week.

Data from that first round suggest states in the Great Plains and upper Midwest had the most success in securing the program’s emergency loans.

According to data from the Small Business Administration, states with smaller populations tended to secure more loan money per capita than more populous coastal states. States in the Great Plains and upper Midwest received higher shares of the PPP loan pool than their shares of the total U.S. population.

Bankers say close relationships between businesses and bankers in states with relatively small populations made the program easier to administer.

On the day the loan program kicked off in early April, Jennifer Davidson sent an email to the bank that works with the financial literacy nonprofit she runs in Lincoln, Nebraska. The email contained the PPP application form, printouts of payroll expenses, and other documents.

About a week later, the $30,000 loan was approved. The money showed up in her nonprofit’s bank account the next day.

Davidson’s experience was far from universal. Many businesses interviewed by Marketplace reported trouble applying for PPP loans because they didn’t have close relationships with banks.

Davidson has a close relationship with her bank. She says that’s just how things are done in Nebraska.

That close relationship helped bankers guide their clients through the necessary paperwork to quickly apply for the emergency loans.

There was also less competition for loans in the Great Plains and upper Midwest.

The San Diego-based Bank of Southern California issued about 950 loans before the first round of funding ran out. Nathan Rogge, the bank’s president and CEO, said that’s a small number, given that California’s the most populous state in the union.

“It just put a lot of strain, and I think that translated into fewer people getting access to the program,” Rogge said.

Industries in the Great Plains and Upper Midwest have also experienced their fair share of catastrophe in recent years. Drastic flooding in the region last year and the pressures of the trade war have taken a toll on the heavily agricultural economy there.

As a result, agricultural, food processing and transportation industries are more familiar with the process of applying for government aid, said Scott Fuess, an economics professor at the University of Nebraska-Lincoln.

“Recognizing another stress coming along, [those businesses] were quick to reach out for the relief that this program offers,” Fuess said.

Plus, Fuess said banks in the region have plenty of experience with the roller-coaster economics of farming. 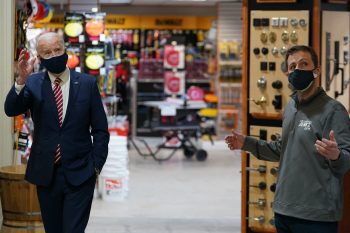