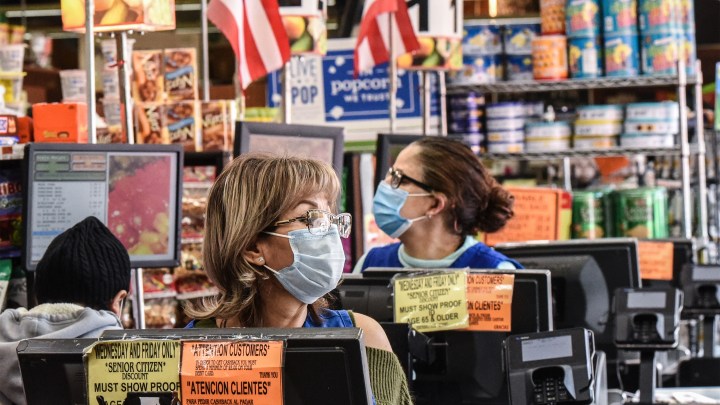 Unemployment is spiking across the country and many of those managing to keep their jobs are getting paid less. It started with top executives at large household-name companies like Disney, Columbia, Lyft and Marriott cutting their pay — sometimes to zero — to keep their companies going during the downturn. Now cuts are trickling down below the major executive suites: at big law firms, at places like the Los Angeles Museum of Contemporary Art, SoulCycle and the medical device giant Boston Scientific.

Los Angeles copywriter Laura Cohn is among those who got a call from her employer with some good-news-bad-news: she could stay on, for now, but with fewer hours and about a 30% pay cut.

“To at least be working a little bit and to have a small amount of income coming in is better than nothing,” she said.

Her husband lost his job as an office manager a couple weeks ago, so Cohn was glad her employer stopped at cutting her pay and hours. “They opted to keep people employed,” she said. “We’re all in this together.”

UCLA management professor David Lewin hopes more firms will take this approach first before cutting jobs. “You can get to exactly the same labor cost reduction objective,” he said

The upside for workers is keeping their benefits and usually a higher income than what they’d get with unemployment insurance, while businesses have an easier time recovering when they avoid layoffs.

But there are downsides, said Paul Davis, a professor of human resource studies at the Cornell Industrial and Labor Relations School. In past downturns, job cuts have been favored over pay cuts by many businesses, because pay cuts can lower productivity and push the highest-achieving workers to leave the company.

The unprecedented nature of the current crisis could change that. “I think that workers are going to be a little more understanding and a little more amenable, at least initially,” he said.

But as pay cuts spread further down the ladder from the executive suite, he said, they have a broader impact on the economy and hit average working people harder.

Laura Cohn doesn’t have to worry about the roof over her head; she’s staying rent-free with family. But she has other bills coming due. And she’s lost a chunk of her paycheck.

“That was basically our health insurance premium,” she said — something she can’t afford to skip in the middle of a pandemic.