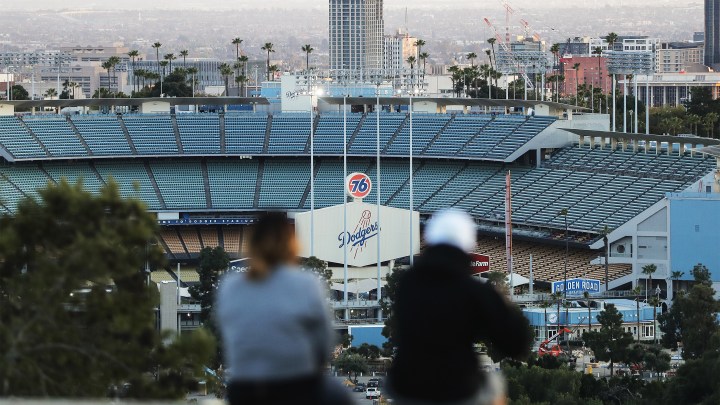 COPY
People sit on a hill overlooking Dodger Stadium on what was supposed to be MLB's opening day — now postponed due to the coronavirus — on March 26 in Los Angeles, California. Mario Tama/Getty Images
COVID-19

People sit on a hill overlooking Dodger Stadium on what was supposed to be MLB's opening day — now postponed due to the coronavirus — on March 26 in Los Angeles, California. Mario Tama/Getty Images
Listen Now

Saddle up for another weekend without sports. They’ve been cancelled in the age of social distancing. No Sweet 16 in the NCAA Division I basketball tournament. No pro basketball and hockey teams jockeying for playoff positions.

And no golfers competing in the WGC Dell Match Play tournament in Austin, Texas — and so no fans buying souvenir golf shirts and expensive beers.

“It’s usually perfect weather, which it is right now. We’ve got the bluebonnets starting to bloom and it’s a perfect time to be walking around a golf course,” said Chad Smith from his home in the Westlake Hills neighborhood of Austin. He had been to every Dell Match Play since 2016. He’ll watch last year’s tournament on the Golf Channel, instead.

It’s a common thread among sports fans. A lot of old games on their go-to channels. Dennis McWilliams has been watching a lot of Longhorn Network. That’s an ESPN channel that shows University of Texas sports.

“I applaud ESPN and Fox Sports for what they’re trying to show us but it’s not our normal fare,” he said. “So we’ve got the Longhorn Network here, which is a lifesaver right now for us in the McWilliams house,” he said.

It just so happens that McWilliams can watch himself on the Longhorn Network sometimes. He played linebacker for the UT football team in the 1990s.

He and his two sons would be watching a lot of college basketball right now, during March Madness. Instead they’re playing a lot of sports video games, like Madden football.

That’s how Lee Tran, an English major at Earlham College, is getting his sports fix, too.

“I’ve just been using this app called Basketball GM. It’s kind of a simulator of an NBA franchise,” he said.

With Basketball GM users sign and trade players. There’s a salary cap and a budget to build your arena and locker rooms. Your franchises success is determined by all these factors.

“It’s not perfect but it’s something to do,” Tran said.

Something to do. That’s what Eileen Garvey of Dallas is after. Normally, she’d be watching Dallas Mavericks basketball games or Texas Rangers baseball games with her family. Not these days.

“We have been punching in movies and basically TV at night when the sports were on,” she said.

She’s been using her time sheltering in place to tutor her granddaughter and niece on FaceTime. But, honestly, she’s just worried about missing Cowboys games.

“I just pray that (the coronavirus) is gonna be all out of here before football season starts,” Garvey said.

If this were a normal year, the first NFL game would be played on September 10. But the football season, like everything else, is up in the air.