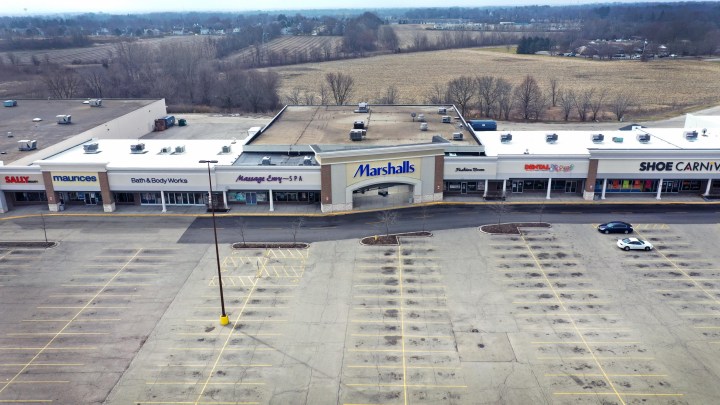 COPY
"If we spent $100 billion right now, on protective gear and testing, we wouldn't be faced with a choice of let hundreds of thousands of people die or kill the economy," Nobel Prize-winner Paul Romer says. Scott Olson/Getty Images
EEC: Econ 101

"If we spent $100 billion right now, on protective gear and testing, we wouldn't be faced with a choice of let hundreds of thousands of people die or kill the economy," Nobel Prize-winner Paul Romer says. Scott Olson/Getty Images
Listen Now

It’s come to this: One of the great questions of our time is balancing keeping more people healthy versus ramping the economy back up to avoid an unprecedented economic contraction.

We sought out a Nobel Prize-winning economist for the case: Paul Romer, New York University professor, who won the Nobel Prize in 2018. Working with a prominent health economist, he’s come up with two things he says have to happen now. The following is an edited transcript of that conversation.

David Brancaccio: You want people to be safe, given everything that’s going on, but you don’t want to kill the economy. Are these not mutually exclusive ideas?

Paul Romer: No, I think there’s a middle path. It’s the one which makes the right kind of balance, but it takes getting ready. So if we just get ready, we can follow this middle path, which involves letting people go back to work if they’ve been tested recently and shown not to have the virus, or if they wear protective equipment that protects others and protects themselves. If we get the investment done in testing capacity, and in better protective equipment, we can start sending people to work and do it safely.

Brancaccio: So in the first part, more tests, we have to ramp up for that. We don’t have the tests now. It would be nice, you write, if we also had a test for antibodies in our system, so that perhaps we could detect who’s had this COVID-19 and might — might — be immune going forward. So there’s that piece of this. But the protective gear, I mean, you’re just talking about masks, you’re talking about moon suits?

Romer: Well, first, let me point out that the antibody test is already being used in South Korea. There’s a spin out from the Ministry of Science and Technology, which is already selling an antibody test there. So the basic science is available on both the virus test and the antibody test. Now, on the protective gear, the first thing is, imagine you work in a grocery store. There may be some people who come in who haven’t been tested and maybe it’s hard for them to get tested right now. You may want to wear a protective suit with a face shield, a mask, maybe even the whole body suit, just to be certain that you don’t get infected by people who are coming into the store. And we can make those suits very quickly if we set about doing it.

Now soon what we could shift to is just you force people to show before they come into the grocery store, that they have a negative virus test within the last 24 hours [or] 48 hours, or if they don’t have a recent negative virus test, you make them come back to the grocery store wearing their own protective suit, so they don’t put in danger anybody in the store. Then the clerks don’t have to wear the suits, but some of the people coming in do. These are all perfectly feasible things if we spent $10 billion, $50 billion, $100 billion in the next few months or a year to get this all in place, and it would be so valuable to us at a time where the economy is losing trillions of dollars of investment, that it’s just unconscionable that we’re not spending, you know, $50 [or] $100 billion on testing and protective equipment.

Brancaccio: You would ramp it in as the protective gear became more available. You might give it to, well, certainly first responders, and then other groups, until the more general population would get the gear?

Romer: Yeah, absolutely. I mean, the people in health care are the most obviously affected. I have somebody I’m close to who’s a doctor on the frontline who’s already got COVID-19. So this is just a problem we’re going to all have to deal with.

Romer: Yeah, you know, there’s a difference between the textbook world that economists like to imagine, and the real world where real people have real feelings. In the textbook world, what economists say is, “Oh, if there’s a huge surge in the price for the protective equipment, it would make sense for a firm to stockpile and hold stuff, just on the chance that they’ll be able to sell it at a really high price when the emergency comes.” But the reality is that people get very emotionally upset and it creates huge political backlash.

Romer: Gouging, yeah, profiteering. And so it’s just not going to work to try and use the textbook solution. And that kills the incentive for any firm to stockpile, because there’s no particular price premium they’re going to be able to sell it at. So now we face a situation where we didn’t stockpile, and we’ve got to find a way to produce in a huge, surge way, but that also is going to cost us a lot more. We can’t just say, “We’ll pay you 10 times, 20 times the usual price to get it within a month,” because people would get mad, reputations of the firm will be destroyed. So we need to use a mechanism like we did in World War II, where the government buys the capital to set up the production line for somebody who’s going to make gear or equipment or make machines. It would be well worth it for us to build that production line, run it as fast as we can for six months, like three shifts a day, and then scrap it if we’re past the problem in six months or a year.

Brancaccio: Because it’s one of the considerations, right? If you’re a private company: You’re like, “OK, yeah, I could make a buck off this now, and at least pay for our costs of doing the right thing … but eventually this terrible period will be over and I’ll be stuck with these machines that make moon suits that we can’t use.”

Romer: That’s exactly right. The fact that somebody could produce a mask for like $10 in steady-state, average conditions, that doesn’t mean they can produce five times as many masks for that same $10 per mask over the next six months. But we’ve got to recognize that we can’t just scold people and tell them, “Don’t be upset about price gouging.” We’ve just got to find another mechanism to get the significant ramp-up that we’re going to have to have in coming months.

Brancaccio: And I’m hearing you saying that even though this would cost what normally is a fortune, getting this amount of protective gear out to the general population because the economy is at stake, it would be worth it?

Romer: Oh, absolutely. We’re talking about like trillions of dollars of lost output and hundreds of thousands of lives that could be lost. If we could spend like $100 billion on the protective gear and the testing — don’t forget the testing. If somebody tests positive for antibodies, they’re home free, they don’t need any more tests. They don’t need to wear any protective suits. But if we spent $100 billion right now on protective gear and testing, we wouldn’t be faced with a choice of let hundreds of thousands of people die or kill the economy. And what worries me is that we’re just going to procrastinate and say, well, right now we have no option but to just kill the economy or kill people. But if we just procrastinate in three months, when we’re facing the same problem, we’re still going to be saying, well, we either have to kill people or kill the economy. And we should get going right now so we can be sure that in two [or] three months, we’re not facing such an awful dilemma.

Brancaccio: So, ventilators and protective masks and gloves now, but also be ramping up for what we might have to wear in our job, day to day, for a while?

Romer: Yep. And we should remember, too, that “perfect” can’t be the enemy of the “good.” Surgical masks are actually pretty good protective gear. There was an unfortunate message that went out, which is that the masks don’t work. It was well-intended, because they didn’t want the public to go buy this limited supply of masks, because they needed the hospital workers to have the masks. But when they said that the masks don’t work, they really misled people. The truth is surgical masks work pretty well. Some people think they may even work about as well as these more expensive N95 masks. But, you know, whichever version you use, something’s better than nothing. And we need some comfortable fashion accessories; it could be instead of facial hair, you just have your distinctive mask that you wear. We just need to get used to that for what may be 12 months, 18 months, who knows, until we get some other solution like a vaccine that would let us pull back from masks and pull back from the challenge of going and getting tested for the virus once a week.

And now for a visual representation of some of what’s been discussed here.

Romer on his website has constructed a simple model to simulate and visualize the effects different policies would have on the spread of COVID-19. The model is not calibrated to real data, and it is not predictive of how the virus might spread. It’ s useful, however, because it allows for qualitative comparison of different policies we might employ to address the virus.

Romer’s thought experiment pits two different approaches against each other:

Romer argues, above all, that if we use frequent testing to determine who gets put into isolation ⁠— rather than isolating at random ⁠— we can be equally effective at containing the virus but cause much less disruption to social interaction, and therefore decrease the negative economic impact.

Romer’s model accounts for the fact that testing can be inaccurate — he incorporates both false negatives and false positives.

Here are the components of the model — symbols that move around in a box to represent people moving around in a given geographic location:

First, the model when isolating people based on test results:

And here’s what things look like if we isolate at random:

You can view these animated models, along with more of the specific details of Romer’s proposals, in full here.