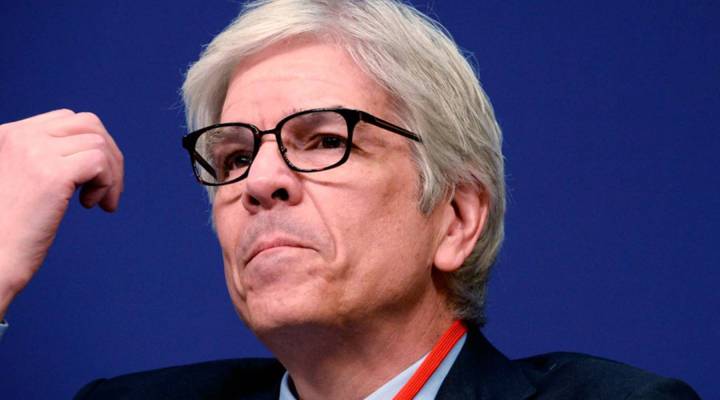 COPY
“I’ve been really disappointed that we just haven’t had the kind of political environment where we can think about speeding up technological progress,” Paul Romer said Monday. ERIC PIERMONT/AFP/Getty Images

“I’ve been really disappointed that we just haven’t had the kind of political environment where we can think about speeding up technological progress,” Paul Romer said Monday. ERIC PIERMONT/AFP/Getty Images
Listen Now

Paul Romer of New York University’s Stern School of Business won the Nobel Prize for economics Monday for his work connecting technological innovation to economic growth. He shared the prize with William Nordhaus of Yale, who researches the economic impact of climate change.

Romer’s big breakthrough was this: He took models of economic growth and added a missing, magic ingredient.

“Paul Romer put the production of ideas at the center stage of economic growth,” said MIT’s Scott Stern. Stern said ideas are different from a lot of other goods because they don’t get used up. “Either I eat an apple of you eat the apple, but we can all use calculus,” he said.

Sharing ideas, like the technology behind the internet, creates growth. Ideas need to be protected, at least a little, to reward people for coming up with them. So you have things like patents on new drugs, for example. Romer put all this together in a concrete economic model with a major implication, said Chad Jones, a former colleague of Romer’s and a professor at Stanford University. Jones summarizes: “Economic growth is the result of these innovative efforts by entrepreneurs and scientists and researchers, and so anything that influences their effort can therefore affect our living standards in the long run,” he said.

Governments have the power to promote or discourage innovation through policy.

“He’s been very influential on governments,” said Joshua Gans, a professor at the University of Toronto. “Paul Romer’s work helped make the case for promoting science and innovation in ways that had not been previously possible.”

And yet, that message hasn’t sunk in as much as Romer himself would like. The U.S. government’s share of all basic research funding in the United States is the lowest it’s been since World War II.

“I’ve been really disappointed that we just haven’t had the kind of political environment where we can think about speeding up technological progress,” Romer said at a news conference Monday.