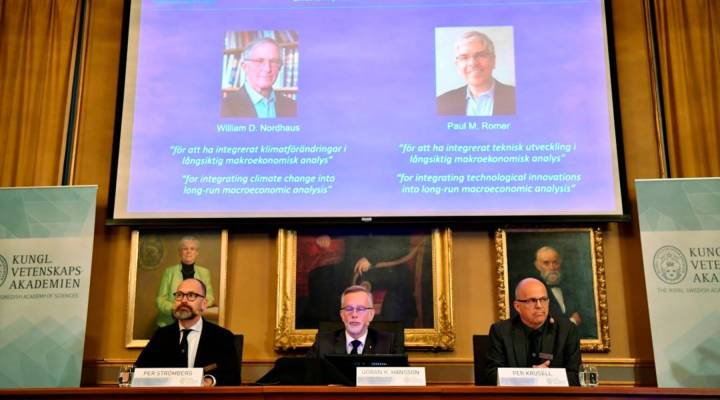 Per Stroemberg, Goeran K Hansson and Per Krusell announce the laureates of the Nobel Prize in Economics during a press conference at The Royal Swedish Academy of Sciences in Stockholm on October 8, 2018. - The Nobel Prize for Economic sciences 2018 was awarded US economists Paul M Romer and William D Nordhaus.  HENRIK MONTGOMERY/AFP/Getty Images

Per Stroemberg, Goeran K Hansson and Per Krusell announce the laureates of the Nobel Prize in Economics during a press conference at The Royal Swedish Academy of Sciences in Stockholm on October 8, 2018. - The Nobel Prize for Economic sciences 2018 was awarded US economists Paul M Romer and William D Nordhaus.  HENRIK MONTGOMERY/AFP/Getty Images

The Nobel Memorial Prize in Economic Sciences was awarded to Yale’s William Nordhaus and New York University’s Paul Romer on Monday morning. Nordhaus developed a way to think about the benefits and costs of mitigating climate change. Romer is also familiar to Marketplace listeners: He figured out a way to factor in technology in economic growth calculations. To help tell us more about the winners, Marketplace Morning Report’s David Brancaccio talked to economics contributor Chris Farrell. Below is an edited transcript of their conversation.

David Brancaccio: Chris, when the bulletin broke this morning, the work of these two men honored here seemed to be on such different tracks, at least to me, but the committee in Sweden sees a key connection.

Chris Farrell: A very key connection. They’re both concerned about long-term economic growth and both had the perspective that you can’t just leave markets alone, that there are these spillovers — the jargon term is “externalities” — and so unregulated markets aren’t as good as they could be.

Brancaccio: Let’s zoom into the individual winners. Yale’s William Nordhaus, familiar to Marketplace listeners, I’ve read several of his books … he’s all about calculating the costs and benefits of climate change.

Farrell: That’s right. He is, since the mid-1970s, has been working on creating a model, and it’s about the economics and technology and climate, and it’s basically the model that everyone is using to try and understand, “What is the long-term effect of global climate change and what should be our economic response?” He’s saying, “Look, let’s put a pretty high price on carbon as an insurance policy against global climate change. And then, the market can work wonders. It will accelerate all kinds of investments in alternative energy. But we have to take it seriously, have to take out this insurance policy, and we have to put a price on carbon.”

Brancaccio: Now Paul Romer, at New York University’s business school now, he also thinks a lot about how you factor in the benefits of technology.

Farrell: In economics for a long time, economists would talk about the supply of capital and the supply of labor when they were talking about long-term economic growth, and that technology was kind of like manna from heaven, it just kind of emerged. And what he built into the economic models is that government policy can have an incredible impact on the ingredients for long-term economic growth. What that basically means is that government needs to focus on “How do you generate more ideas? How do you get more people involved in creating ideas that might lead to new technologies in order to generate long-term economic growth?” And government policy should really focus a lot less on whether or not there’s going to be an uptick in inflation or a downtick in the economic cycle.