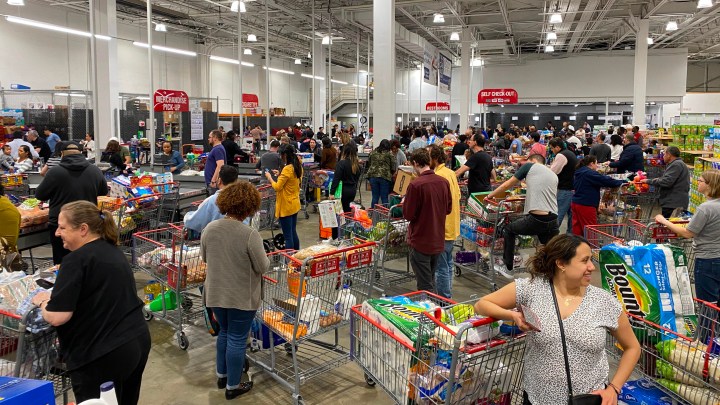 Price discrimination is baked into a lot of mundane daily transactions.

“If we see a sale; if we see coupons; if the price is different for seniors or students at a movie theater than it is for adults — all of that counts as price discrimination,” said Homa Zarghamee, an economics professor at Barnard College who advises Core Econ, the publisher of the open-source economics textbook Marketplace’s David Brancaccio is reading with listeners.

We’re perhaps most accustomed to it when we’re buying airfare, knowing that purchasing a ticket months in advance will likely be cheaper than buying it the night before.

Price discrimination looks a little different in this era of novel coronavirus, however. On eBay, right now, people are still selling packs of toilet paper at inflated prices given the bare shelves in some stores. Many sellers are presumably profit-seeking scalpers, who grabbed the TP early.

When stores can’t use dynamic pricing when demand surges ⁠— because in an emergency, we call that “price gouging” ⁠— one consequence is the scalping, a so-called “secondary market.” Some see “efficiency” in letting stores or scalpers jack up prices to what ever people are willing to pay.

But, Zarghamee says, you have to account for income inequality.