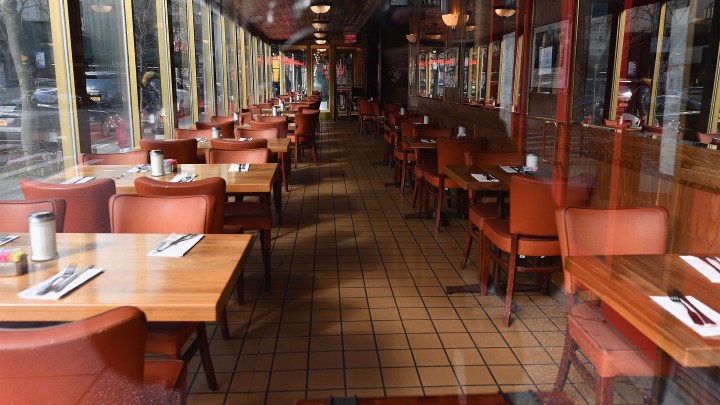 COPY
An empty restaurant, like this one was on Monday in Brooklyn, is an increasingly common sight across the U.S. Angela Weiss/AFP via Getty Images
COVID-19

An empty restaurant, like this one was on Monday in Brooklyn, is an increasingly common sight across the U.S. Angela Weiss/AFP via Getty Images
Listen Now

The coronavirus is hitting the services sector pretty hard. The governor of Oregon ordered bars and restaurants to close for anything other than takeout on Monday. The same thing is happening all across the country, especially after New York and Los Angeles shut things down, too. So how’s the restaurant industry dealing?

Back in February, the Taiwanese restaurant 886 in Manhattan started seeing a steady slowdown. Co-owner Eric Sze said the drop-off in business was manageable at first.

Sze said by Friday, revenue was down 80%. That cut directly into the cash he uses to pay his employees, buy supplies and pay rent. A restaurant like his doesn’t have a buffer to sustain a hit like that.

On Sunday, Sze closed down the restaurant and sent employees home. That same day, Emmeline Zhao, who manages Little Tong Noodle Shop, shut down one of her three Manhattan locations.

Zhao said the restaurant industry is already risky, and something like this can be devastating.

“We’re seeing only the beginning of it, and it terrifies me,” Zhao said.

“That money could go to anything,” said Gregg Bishop, the department’s commissioner. “It could be to install a point-of-sale system, it could be to do something different than they normally would have done.”

A group of independent restaurants around the country is offering discounted gift cards. They call them “dining bonds,” and the idea is to keep cash coming in. Other restaurants are trying different strategies.

“Like, our door handle used to be black, now the silver’s definitely showing,” Chu said.

At 886 in New York, Sze will start selling beef noodle kits customers can heat up at home.

“I’m heading in after this call to prep, actually,” he said, adding that he’ll use the proceeds to pay his employees — who are now out of a job.