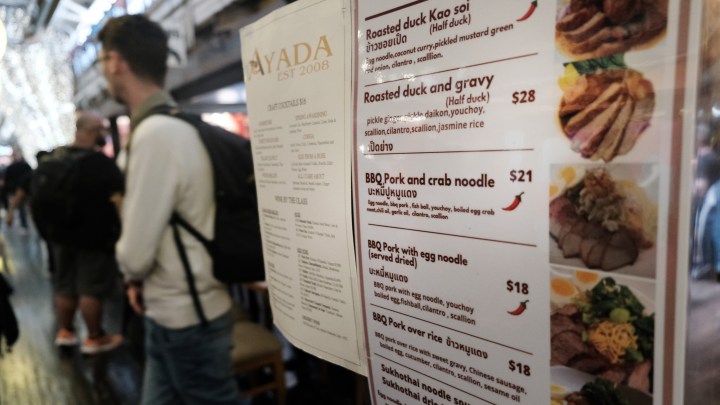 COPY
Even though restaurants' costs are rising, owners may not raise menu prices as much to avoid scaring customers away. Spencer Platt/Getty Images

Even though restaurants' costs are rising, owners may not raise menu prices as much to avoid scaring customers away. Spencer Platt/Getty Images
Listen Now

A couple of new reports on the state of the restaurant industry are showing mixed results.

OpenTable, the reservation-booking platform, says more people are dining out now than before the pandemic. Meanwhile, the National Restaurant Association’s most recent survey of members indicates that profitability is down.

“They’re not smiling as much as they were,” he said. “You know, it’s like sometimes you get the irritated customer. You know, you just can’t make them happy.”

But he’s not letting the occasional grump ruin his outlook because, he said, business is good again. Foot traffic at his restaurants is back to pre-pandemic levels. Alcohol sales are up too.

OK, so people are happy to go out, but not necessarily happy while they’re out? Those conflicting feelings could have a lot to do with how expensive it is now to eat out. All this puts business owners on edge.

It’s why restaurants hesitate to raise prices as much as they need to. The last consumer price index showed that the cost of food away from home was up more than 7.5% in the prior 12 months. That’s a smaller increase than the cost of groceries, which means restaurant owners are eating some of the cost and making less money.

Laurie Torres owns Mallorca, a Spanish and Portuguese restaurant in downtown Cleveland. “I joked a couple weeks ago that I was going to make the whole menu market price,” she said.

Like, if she changed the price of a dish from $14 one day to $18 the next. In reality, she’s raised prices once this year, about 7%. She’s also not running her usual specials because they’d have to be ridiculously priced to make a profit.

“I know a lot of my customers are like, ‘Where’s the sea bass?'” Torres said. “And I’m just like, right now I just cannot do the sea bass.”

For now, Mallorca’s salmon and tilapia will have to do.