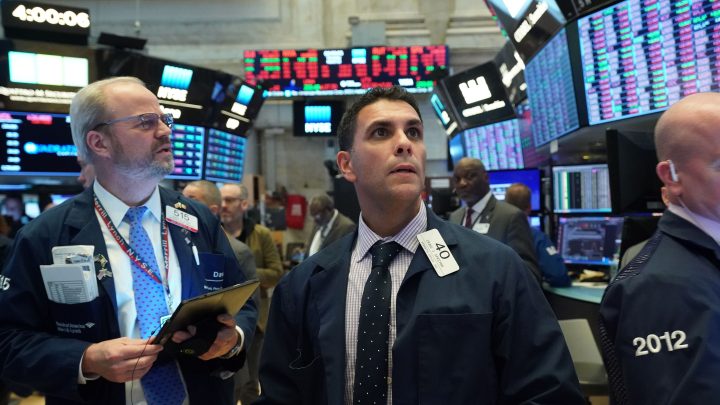 Traders work on the floor at the closing bell of the Dow Industrial Average at the New York Stock Exchange on Thursday. Bryan R. Smith/AFP via Getty Images
COVID-19

Traders work on the floor at the closing bell of the Dow Industrial Average at the New York Stock Exchange on Thursday. Bryan R. Smith/AFP via Getty Images

For the third time in a week, a stock market plunge triggered circuit breakers that temporarily halted trading at the New York Stock Exchange.

Trading stopped for 15 minutes when the S&P 500 fell more than 8% after Monday’s opening bell. At one point, the Dow plunged more than 2,600 points and the Nasdaq Composite Index dropped more than 910 points.

The declines come after the Federal Reserve slashed its benchmark interest rate to zero on Sunday — a move it hasn’t made since the 2008 financial crisis — in response to the coronavirus and announced it would buy $700 billion in Treasury and mortgage bonds.

Here’s a look at how these circuit breakers function and why they were implemented in the first place:

“Marketplace’s” Kai Ryssdal explains that these breakers are supposed to let investors figure out what’s actually happening and stop the market free fall.

Circuit breakers will kick in and halt trading at the following levels:

When trading has stopped

Trading stopped last Monday and Thursday after the S&P 500 dropped 7%. But before that, the first — and only other time — the New York Stock Exchange halted trading because of circuit breakers was on Oct. 27, 1997, during the Asian financial crisis.

Under different rules at the time, the NYSE hit pause after the Dow Jones declined by about 550 points.

When circuit breakers were first implemented

Circuit breakers were first put into place after Black Monday, when the Dow plunged 22.6% — its biggest one-day loss in history.

Diana Henriques, author of the book “A First-Class Catastrophe,” told Marketplace that investors were selling because computer-driven strategies told them to sell instead of using economic and political assessments.

So basically, these circuit breakers were put into place to stop panic selling. But they might not be as effective they aim to be.

Henriques said that might actually speed up the panic, because everyone will try to exit the market before the circuit breakers officially kick in.

There are also now dozens of major stock exchanges around the world.

“Trading now observes no borders,” Henriques said. “So, you know, a circuit breaker on a global 24-hour-nanosecond-driven stock market — it’s kind of like a handbrake on a bullet train. Good luck with that.”