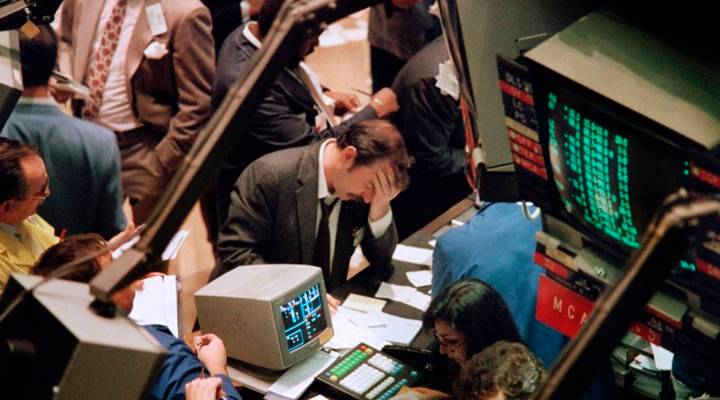 COPY
A trader on the New York Stock Exchange reacts on Oct. 19, 1987, as stocks are devastated during one of the most frantic days in the exchange's history. The Dow Jones index plummeted over 200 points in record trading.  MARIA BASTONE/AFP/Getty Images

A trader on the New York Stock Exchange reacts on Oct. 19, 1987, as stocks are devastated during one of the most frantic days in the exchange's history. The Dow Jones index plummeted over 200 points in record trading.  MARIA BASTONE/AFP/Getty Images
Listen Now

Some people attribute it to disappointing trade deficit numbers or increasing tension in the Persian Gulf, but the fundamental reasons had to do with a selling panic among institutional investors, according to Diana Henriques, author of the book, “A First-Class Catastrophe: The Road to Black Monday, the Worst Day in Wall Street History.”

Henriques said that investors, instead of using economic and political assessments, were selling because computer-driven strategies told them to sell.

Yet this event is a footnote in our financial history. Henriques said it’s important to remember the single-day drop, because 30 years later, there are still some lessons we can learn from it. Here are some risk factors she highlighted.

The bond market had been turmoil in the ’70s because of galloping interest and inflation rates. Big institutional investors — think giant mutual index funds and university endowments — began shifting assets from the bond market to the stock market in the ’80s at exponential rates, using similar strategies, she said. In 1982, the bull market began to get on its feet.

“Suddenly, we as a nation were confronted with the fundamental question we should always ask: How good is the strategy if everybody tries to do it at the same time?” Henriques said. “That’s where we were on Black Monday. Everybody trying to get to the exits at the same time.”

And now in 2017, we have large institutional investors pursuing similar strategies. BlackRock, one of the largest asset managers in the country, is just shy of $6 trillion under management.

“So that element of risk is with us to this day and remains unaddressed and unappreciated,” she said.

Following the crash, a Republican-led commission found that we need a unified regulatory system. Republicans also made the same argument in 2008, and the Donald Trump administration even produced a report on U.S. capital markets that came to the same conclusion.

But rather than prescribing a solution, Henriques said, the Trump report just said they simply hoped for greater harmonization among regulatory agencies.

“What we have failed to recognize is we’re regulating as if we still have this mom-and-pop stock market where stocks trade over here, and bonds trade over there, and derivatives trade over here,” Henriques said. “That’s gone with the wind. That is not coming back. It was gone before Black Monday.”

To halt panic selling, we’ve implemented circuit breakers to stop trading. That should stop a nearly 23 percent fall from happening in the future, right?

Actually, Henriques pointed out, academics found that they may just end up speeding up the panic, with everyone trying to exit the market before the circuit breakers kick in.

We also have three dozen places where stocks are traded. Back in the day, you had the Nasdaq, the American Stock Exchange and the New York Stock Exchange. But now there are 12 stock exchanges and at least 30 other platforms for trading stocks, Henriques said.

“Trading now observes no borders,” she added. “So, you know, a circuit breaker on a global 24-hour-nanosecond-driven stock market — it’s kind of like a handbrake on a bullet train. Good luck with that.”