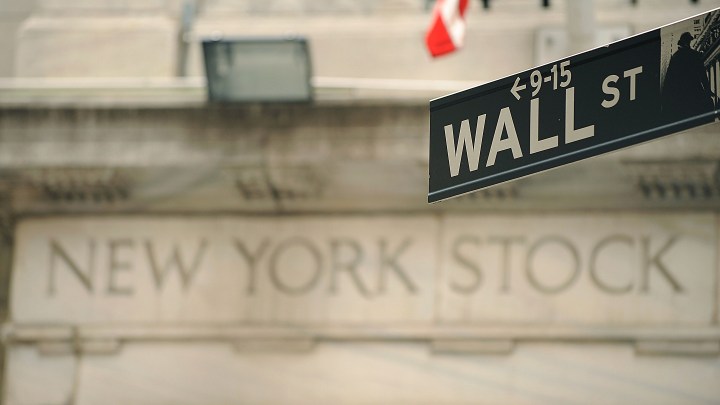 COPY
Wall Street banks, brokers and traders will pay a lot to be first in trading changes. Above, the New York Stock Exchange seen in 2008. Stan Honda/AFP/Getty Images

Wall Street banks, brokers and traders will pay a lot to be first in trading changes. Above, the New York Stock Exchange seen in 2008. Stan Honda/AFP/Getty Images
Listen Now

The New York Stock Exchange is under fire for constructing a pair of antennas on the roof of its data center in Mahwah, New Jersey.

According to critics, these antennas would transmit trades and other market information faster than those currently used by private firms. Those firms are afraid that the NYSE will charge high fees for use of the faster antennas — and that one company could get the exclusive right to use them, thereby limiting competition.

“This is blatantly anti-competitive,” according to market-making firm Virtu Financial in a letter of complaint to the Securities and Exchange Commission. Virtu complained the antennas would give NYSE a monopoly over speedy access to data and that the exchange could “charge exorbitant fees for access to its antenna, while potentially lower-cost wireless providers that could provide competition to the NYSE vendor are arbitrarily blocked from participating in the market.”

The NYSE antennas are, according to critics, two-millionths of a second faster than private antennas used by market makers and trading firms.

“Everything happens in two-millionths of a second,” said Larry Tabb, founder of Tabb Group, an advisory firm focusing on infrastructure. “You know, Trump tweets something and people react, whether it’s starting a trade war with China or resolving a trade war with China. But the first person to see that and react, that reaction can occur two-millionths of a second after that tweet is launched.”

On Wall Street, it’s usually an algorithm that’s reacting rather than a person. What matters is being first to snag a price before it changes or unload a stock before it tanks. It doesn’t matter if that’s by two-millionths of a second or five minutes.

“It’s a zero sum game, so there’s only one first person,” Tabb said.

As a result, Wall Street banks, brokers and traders will do a lot — and pay a lot — for the chance to be first. One way they do that is by installing equipment as physically close as possible to where stock trades happen. They pay significant fees to keep servers inside stock exchanges’ data centers, where computers match buyers and sellers.

The New York Stock Exchange’s data center is in Mahwah, New Jersey, roughly 25 miles from the exchange floor on Wall Street. Firms that pay to locate their servers inside the data center run data through fiber-optic cables underneath a street to a grassy median and then up a tower to microwave antennas that distribute that data. An antenna on that pole can cost a company $15,000 per month.

The New York Stock Exchange has upset that race by building its own antennas on the roof of the data center. The data doesn’t have to go from the NYSE computers through a fiber-optic cable under the street and up a pole. Instead, it goes straight to the roof and comes out of the antennas two-millionths of a second faster than from the antennas across the road.

“The New York Stock Exchange, they figured out that, ‘We know we’re the provider of the data they need it, and they have to come to us to get it.’ And essentially, they’re holding [Wall Street firms] hostage,” Saluzzi said.

According to Chester Spatt, professor of finance at Carnegie Mellon and former chief economist at the SEC, “The real fear is whether that then undercuts competition in the trading process.”

At a minimum, Spatt said, the race for speed may benefit individual firms, but it doesn’t leave the public better off.

“Even high-frequency [trading] firms are saying this technological race is wasteful,” he said.

Not all stock exchanges cash in on their monopoly power to control speed. The Investors Exchange or IEX, for example, slows down its data.

“We purposely injected 350 microseconds of delay so that we didn’t have to play into this arms race,” said Ronan Ryan, president of IEX (350 microseconds is 175 times longer than the two-millionths of a second that’s roiling the NYSE).

“It’s like a referee in the NFL making more money selling sticking gloves to one of the teams then he’s being paid to referee the game,” he said.

Last year, the SEC started reviewing fees charged by stock exchanges. It wouldn’t comment for this story, nor would the NYSE or Virtu Financial, the firm that complained to the SEC.