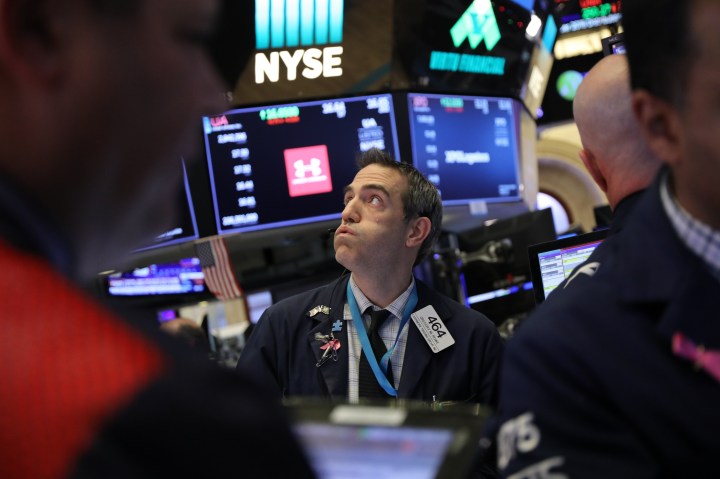 Traders on the floor of the New York Stock Exchange. Flush with cash, many big American companies are buying back their own shares, a practice that is relatively unregulated. Spencer Platt/Getty Images
I've Always Wondered ...

Traders on the floor of the New York Stock Exchange. Flush with cash, many big American companies are buying back their own shares, a practice that is relatively unregulated. Spencer Platt/Getty Images

How do insider trading rules apply to corporate stock buybacks? For example, what prevents Warren Buffet and Charlie Munger from waiting until Berkshire Hathaway releases news that they know will cause the stock price to drop to repurchase shares?

Stock buybacks have gained steam again this year after the economy dipped because of the COVID-19 crisis.

In the second quarter, S&P 500 companies spent almost $199 billion on stock repurchases, compared to $88.7 billion during the same period last year. Buybacks have garnered extra scrutiny in recent years, with critics saying they manipulate stock prices and benefit top executives when profits could go toward, for example, workers’ wages.

When it comes to regulations governing buybacks, insider trading laws apply to individual officers and directors but leave corporations unfettered, according to David Yermack, professor of finance and business transformation at the New York University Stern School of Business.

“The general rule is: Disclose or abstain. Which means if you know material inside information, that information has to be made public before you trade, or you have to simply abstain from trading,” Yermack said.

He explained that the regulation falls back on Rule 10b-5 — a general anti-fraud measure that the Securities and Exchange Commission instituted in 1934.

This rule makes it illegal for people to use any means to defraud, make a false statement or omit information about a “material fact” or engage in any deceptive practice in connection with the purchase or sale of a security.

But Yermack said there’s plenty of gray area when it comes to the definition of “material” information — generally, information that could affect a company’s value — and what it means to disclose it.

“You’ve had increasing difficulty with the area of what’s material or not because I would argue that the managers almost always have material information. They always know more than the public, and some of what they know is undoubtedly important,” Yermack said. “What the law is really fixated on are cases involving mergers and acquisitions and other very high-profile announcements like quarterly earnings, bankruptcies — things where it would be beyond dispute whether this was truly material.”

Justin Klein, the director of the University of Delaware’s Weinberg Center for Corporate Governance, said it would be “problematic” if a company intended to sit on information while awaiting a more profitable stock buyback opportunity. However, he said, there’s no specific law that defines insider trading in this area.

In 1982, the SEC instituted Rule 10b-18, also known as the Safe Harbor rule, which is aimed at reducing a company’s liability for manipulation when it’s buying back stock. Essentially, this made it much easier for companies to purchase their own shares as long as they met several conditions.

Companies must buy shares through only one broker or dealer on any single day and time their purchases so that companies can’t trade within the last 10 to 30 minutes of the day (depending on the size of the company). They also can’t buy stock at prices that are lower or the same as the highest independent bid, or buy back more than 25% of a stock’s average daily trading volume.

“A company can’t really commit insider trading,” Yermack said. “But theoretically, a company could violate the market manipulation laws if it had a very shady repurchase program where they weren’t making public announcements and were overstepping the rules, but I don’t think that happens.”

Since this ‘80s rule took effect, buybacks have soared. In 2018, they spiked to a record $806 billion. In 2015, then-SEC Chair Mary Jo White acknowledged that the commission wasn’t monitoring buybacks.

We’ve seen other issues concerning buybacks, with company insiders taking advantage of the announcements by selling shares after news that pumped up the price.

In 2017, video game maker Activision announced a $1 billion program to buy back its shares, The Washington Post reported. The price rose as investors heavily bought its stock. In response, top Activision execs ended up selling shares worth over $430 million. All perfectly legal.

“The ability for corporate insiders to personally benefit from knowledge that buyback activity is happening is a clear problem. And it’s a clear loophole,” said Lenore Palladino, an assistant professor of economics and public policy at the University of Massachusetts Amherst.

Palladino said corporate insiders should be prohibited from trading their own shares during buyback periods. If they’re not restricted, they should disclose that trading in real time.

She also argued that the SEC should, at the very least, collect data on daily buyback activity. Right now, companies are required to report monthly share repurchases on their Form 10-Q — a quarterly report.