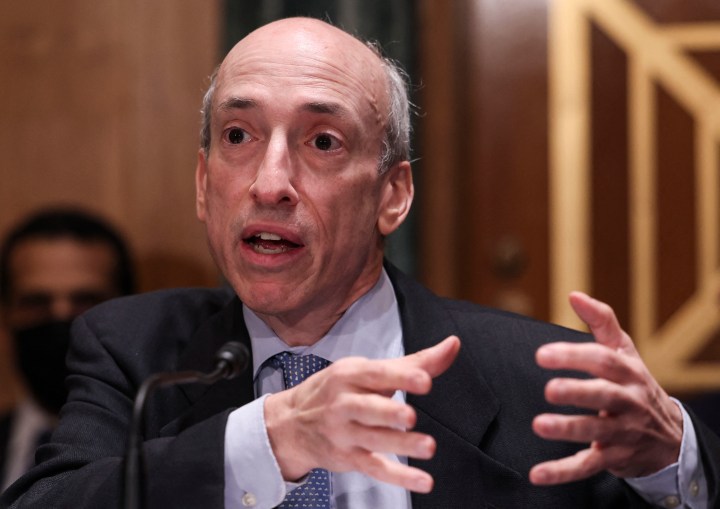 The Securities and Exchange Commission chairman Gary Gensler has unveiled a set of proposed rule changes that could attract stiff pushback from companies, including around shareholder power, stock buybacks and preventing insider trading by company executives and directors.

Erik Gordon, a professor at the University of Michigan’s Ross School of Business, spoke with “Marketplace Morning Report’s” David Brancaccio about the new proposals and their implications. The following is an edited transcript of their conversation.

David Brancaccio: One of these proposals is about the power that shareholders have to influence the direction of the company. Now a lot of us don’t go to the actual shareholder meetings, we mail in those little cards they send us to register our vote on making a company more sustainable or maybe changing the management. The SEC is thinking of beefing up our power to do so?

Erik Gordon: Yes. Those proxy cards now work like this: We can vote either for the entire set of directors that management proposes — you know, the friendly people who won’t make any changes — or the entire set of directors that the activists have proposed. We can’t vote for some of each. And that has favored the company because usually some of the company directors look pretty good, and [shareholders] are a little bit leery of throwing them all out. The proposal from the SEC is for something called a universal proxy: We can mix and match; we can pick two directors proposed by activists and four directors proposed by management. And this is going to help activists get at least some directors on the board, and that’s going to help them push some changes.

Brancaccio: Now, another proposal out of the SEC’s Gary Gensler involves a popular move by companies: Buying back their own stock, which has the effect of boosting the share price.

Gordon: The companies would have to disclose more about why they’re buying shares [and] what number of shares they expect to buy back in the future. It won’t keep them from buying back shares, but it goes halfway towards what the labor side hopes far, which is making share buybacks much more difficult.

Brancaccio: When these proposals came out, this made a lot of people stand up and take notice in corporate boardrooms around the country, but they’re not in practice yet. These are proposals.

Gordon: They are proposals, which means it goes to that grinding administrative process. There will probably be court challenges to them. But what’s interesting is, after 10 or 12 years of not much coming out of the SEC that irritated companies and CEOs, we’re seeing a real flurry of reforms that has them worried.

Brancaccio: Now we’ll see if this ever gets into actual rules, but corporate executives, first of all, if one of them were to get a nice compensation package, nice pay, bonuses — and then the company hits the skids, often some people are saying, “Wait, should that person get paid the way they are?” And this addresses this, at some level.

Brancaccio: Yeah, I mean, the British like this term; we use it sometimes here: the claw back. Getting the money back if the financials were restated.

Gordon: And this is one that executives have fought. They’ve brought up all of these examples, kind of absurd examples where it might be unfair. But what is more unfair than paying somebody a bonus they don’t deserve?

Brancaccio: Now that’s one proposal. Here’s another one: Executives know a lot of inside information. I mean, it’s their business to know the inside information. So when can they sell their stock? There are rules for that, and there are some new ones being proposed.

Gordon: Yeah, practically, if you are the CEO of the company, you always have inside information. So there is an avenue that lets them sell their stock or buy it safely, and it works like this: they set up a plan in advance, and under the plan they are going to automatically buy or sell a set number of shares on a set calendar schedule.

Brancaccio: OK, so that’s how it was supposed to work. But some executives have figured out ways to get some good legal advice and maybe get around this a little bit?

Gordon: Yeah, they’ve been very clever at finding ways to abuse the rule. For example, you set up one of these schedules, but if you then learn some information that says you shouldn’t sell — a new product is coming out — you change the plan, or you abandon the plan. Or how about you just set up a whole bunch of plans — one says you sell, one says you buy; you drop the plan that’s not working out for you; you keep the plan that puts money in your pocket.

Brancaccio: And the proposed new rule would tighten the system up?

Gordon: The proposed new rules would take away almost all of these loopholes, and you have to wait at least 120 days after you implement a plan to actually trade the stock or make changes. So the SEC has figured out the game and is putting an end to it.