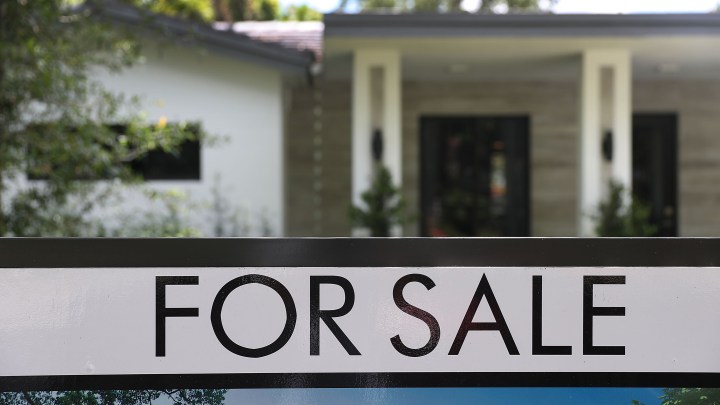 While benefiting some, the GOP’s massive 2017 tax overhaul also took away some key deductions for state taxes and capped the property tax deduction. This hit people in so-called “blue states,” parts of the country with high property taxes and higher home prices.

A new report from ProPublica and Fortune Magazine calculates that the tax law is making house values lower in some parts of the country than they’d otherwise be.

It’s the work of two voices that will be familiar to Marketplace: Mark Zandi, chief economist at Moody’s Analytics, and the story’s author, ProPublica editor at large Allan Sloan.

Marketplace’s David Brancaccio spoke to Sloan about his piece,”Trump’s Trillion-Dollar Hit to Homeowners.” The following is an edited transcript of their conversation.

David Brancaccio: Nationwide, how much home value in the aggregate has been lost, according to this analysis?

Brancaccio: Now, we should be clear, it’s not that the tax law dropped the prices of homes in America by 4%. It’s that they might have been 4% higher had it not been for the tax law, according to you.

Sloan: Zandi says, on average, they would be 4% higher. In addition, a second source, a fellow named Hugh Lamle, his numbers were different, but he had a similar methodology. When these two people who don’t know each other and have never talked come up with the same methodology, you can be sure I’m going to listen.

Brancaccio: Mr. Lamle is a retired Wall Street guy. Your piece examines a house in suburban New York. It’s actually West Orange, New Jersey, an $800,000 house, which sounds like a lot in many parts of the country. It’s really more upper-middle class in the New York Metro area. This effect of the 2017 tax overhaul really puts a dent into that home’s value.

Sloan: Right. This house has property taxes of just under $29,000 a year. And they used to be fully tax-deductible. Now I’m assuming they’re not tax-deductible. And when you go through the math, you end up with a hit to value of somewhere between $138,000 and $173,000.

Brancaccio: That range depending on what mortgage rate that they’re paying. OK.

Sloan: So if you bought the house in, say, the middle of 2017, having no idea this tax bill was coming, and you were going to lose your tax deductions and you put up a 25% down payment, which is $200,000, your loss of value is more than half of what you put into the house. This is an extreme example, but it’s very telling.

Brancaccio: Now what about the argument that the 2017 tax overhaul spurred economic growth? I mean, that presumably might create extra demand for houses, and that could drive prices up a little bit?

Sloan: I suppose, but I don’t think that happened, any more than the average first person got the $4,000 pay increase that the White House was talking about being a result of the new tax law.