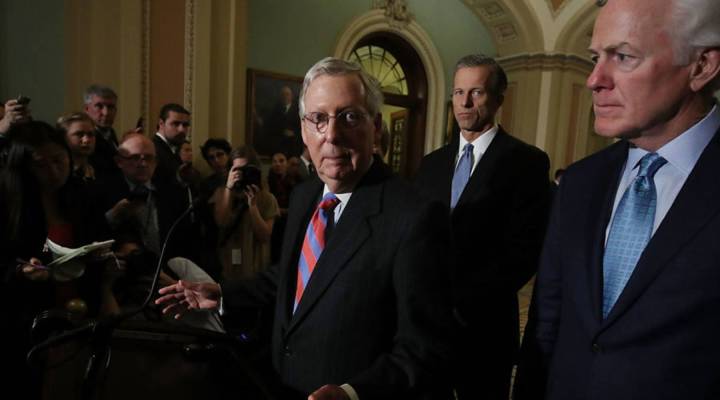 COPY
Senate Majority Leader Mitch McConnell, a Republican from Kentucky, speaks to reporters about the Senate's version of the tax reform bill today at the Capitol. Mark Wilson/Getty Images

Senate Majority Leader Mitch McConnell, a Republican from Kentucky, speaks to reporters about the Senate's version of the tax reform bill today at the Capitol. Mark Wilson/Getty Images
Listen Now

An argument for the proposed GOP tax reform is that it will increase the global competitiveness of American companies, leading to the U.S. becoming a more attractive location for global firms to invest.

Currently, the U.S. has the highest corporate tax rate among developed countries, but most companies don’t pay the full rate.

Jonathan Traub of the Tax Policy Group at Deloitte Tax LLP said under the GOP’s new tax plan, the U.S. would lower the corporate tax rate, and switch to a territorial tax regime, in line with most other developed countries.

Companies would pay taxes on profits based on where they earn them, instead of their country of origin. A lower rate could also lure more investment in businesses based here, as a part of other considerations.

It could also mean that companies might “pay out big dividends to their shareholders instead of investing in new technology and upgrading their workforce skills,” said Virginia Haufler, whose research at the University of Maryland, College Park, focuses on transnational corporations.

She said if that happens, the U.S. would look a lot less attractive as a place to invest, since taxes are just a part of the larger picture of what companies consider.

“The key to having a good position, good investment opportunities in the United States is No. 1, lowering the tax rate, but No. 2, the right regulatory environments,“ said William Lee, chief economist at the Milken Institute.

Regulations, education, infrastructure and many other factors all can help determine how competitive a country looks in the global marketplace. What’s important often depends on what the industry is and how badly it wants to be in the target country.

Correction (Dec. 6, 2017): An earlier version of this story misattributed the sentence regarding the current U.S. tax rate to Jonathan Traub. The text has been corrected.