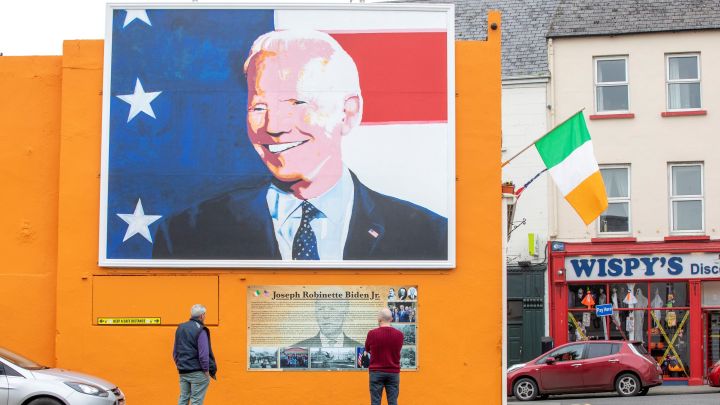 COPY
Irish enthusiasm for “the boy from Ballina" may soon begin to wane. Paul Faith/AFP via Getty Images

Irish enthusiasm for “the boy from Ballina" may soon begin to wane. Paul Faith/AFP via Getty Images
Listen Now

Much of Europe has applauded President Biden’s proposals for global tax reform. The call for a worldwide minimum corporate tax rate of as high as 21%, the same as the existing rate in the U.S., has gone down well with most cash-strapped European governments.

But several small and medium-sized European Union states –– Ireland and Hungary among them –– aren’t so impressed with the plan. They fear that a significantly higher global minimum would damage their ability to attract foreign direct investment. Ireland’s “headline” corporate tax rate is 12.5%, Hungary’s is 9%, the lowest in the European Union.

Ireland, in particular, has been spectacularly successful in pulling in cash from overseas. In the past 50 years it has transformed from a poor, largely agrarian economy into one of the richest nations on earth.

Today, Ireland is a major European base for foreign corporations which, according to estimates from the Irish government’s Department of Enterprise, Trade and Employment in Dublin, account for 20% of all Irish private-sector jobs.

The potential threat to this source of prosperity is all the more galling for Ireland because it’s coming from a man who is famously proud of his Irish roots –– the President’s ancestors hail from the town of Ballina in County Mayo where, in November last year, the locals celebrated Biden’s victory with champagne. “We’re all delighted to see Joe get into the White House, to see an Irish connection, a Mayo connection, a Ballina connection,” said one resident.

If the call for global tax reform is answered, Irish enthusiasm for “the boy from Ballina” may soon begin to wane.

“Ireland is very heavily exposed to the type of global changes that may be about to come down the road,” said Alex Cobham of the campaign group Tax Justice Network. The country’s 12.5% corporate tax rate is in the firing line. And so it should be, said Cobham, because it’s enticed scores of multinationals to shift their profits to Ireland, away from the countries where they were earned, depriving those countries of the revenue.

“We estimate that Ireland is causing about $6 billion of revenue loss worldwide each year through procuring profit shifting. So it’s pretty big money,” he said.

It has not escaped the attention of the U.S. that many of the largest foreign corporations that have settled in Ireland are American: Intel, Apple, Pfizer, Facebook, Microsoft and Google, to name just a few.

“We have described Ireland as the 51st state, from an investment point of view, because of the scale of U.S. investment in the country,” said Dermot O’Leary, chief economist at financial services firm Goodbody in Dublin. O’Leary said the main attraction for the U.S. has been the opportunity to access the EU through an English-speaking country, and that the low level of corporate tax has been a factor. Meaning Biden’s 21% proposal is concerning.

“The higher that particular tax rate goes from Ireland’s 12.5%, the bigger the potential damage it does to investment on the ground here in Ireland,” O’Leary said.

A decline in inward investment to Ireland would impact the Irish state’s tax revenues.

“We take in about €10 billion [$12 billion] in corporate taxes a year,” said John Whelan, a former head of the Irish Exporters’ Association. “That’s a large sum for a country the size of Ireland. The government estimates that we could lose 20% of that if the Biden proposal is accepted. So, obviously, it could be a blow.”

Whelan does not believe Ireland’s attractiveness as a destination for inward investment would be irreparably damaged by higher taxes. Brexit, he said, could soften the blow. “We’re now the only English-speaking country within the EU and we can enable US companies to access  a huge market of 450 million people,” Whelan said.

One of Ireland’s leading economists and the former head of the government’s budget watchdog, Seamus Coffey of University College Cork, is also fairly sanguine about the country’s future. He does not believe that an exodus of foreign-owned companies is imminent. For many of them, the roots are already too deep.

“Pepsi have been here since 1974. Pfizer since 1969. These companies have a long history in Ireland and they’re not going to leave in a hurry,” Coffey said. But, he added, “If the tax advantages do change over the medium term, we could see some changes in their investment decisions.”

Ireland seems likely to suffer at least some economic pain. It’s not certain that Congress will back Biden’s proposal for a global corporate tax rate. Should it, it would be ironic that foreign direct investment, a great engine of Irish prosperity, could be threatened by such a proud son of Ireland, the boy from Ballina.