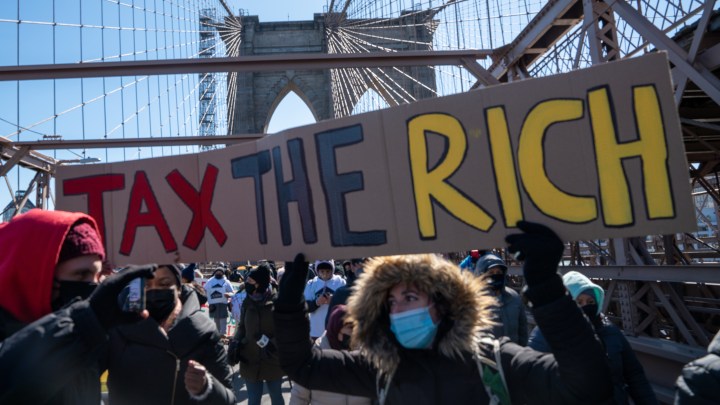 COPY
The Biden administration supports a corporate tax hike to 28%. That could lead to more attempts to game the system and shift profits overseas. David Dee Delgado/Getty Images

The Biden administration supports a corporate tax hike to 28%. That could lead to more attempts to game the system and shift profits overseas. David Dee Delgado/Getty Images
Listen Now

The Biden administration is proposing a corporate tax hike that would reverse some of the breaks companies got in the last tax overhaul, under the Trump administration — raising their tax rate from the current 21% to 28%.

Biden wants to use that additional revenue to offset some of the costs of the $2 trillion American Jobs Plan. The worry is that could create an even greater incentive for companies to shift profits to countries with lower tax rates. To fight that, the U.S. has come out in support of an effort by the Organization for Economic Cooperation and Development. It would create a global minimum tax for corporations, so this kind of gaming of the system doesn’t keep happening.

This gaming of the system — it’s not great for countries like the U.S., but it works for tax havens like the Cayman Islands.

“Their argument is that they don’t have as developed an infrastructure or they’re not in the center of transportation networks or other things,” said Terrence Chorvat, an international law professor at George Mason University. “And so they charge a lower rate in order to attract businesses.”

That creates what many policymakers in the U.S. have called a race to the bottom.

“Countries compete with each other to lower tax rates to attract more corporations,” said Steve Rosenthal, a senior fellow at the Urban-Brookings Tax Policy Center.

So the OECD is trying to strike a deal that would make this profit-shifting maneuver much harder. Countries would agree to a minimum tax rate for foreign corporate subsidiaries.

I won’t get into the weeds here, but Rosenthal said in the plan there are ways the U.S. and the OECD are trying to push all countries to participate.

“And the consequences of not participating could be large enough that they would go along, at least to some extent,” he said.

But more than 50 countries are not even at the negotiating table for this deal.

“So there remains a question as to whether or not there could still be tax competition with other countries still imposing lower rates of tax,” said Lilian Faulhaber, a law professor at Georgetown.

But, she said, the OECD is getting a lot closer to a deal than any other group has.