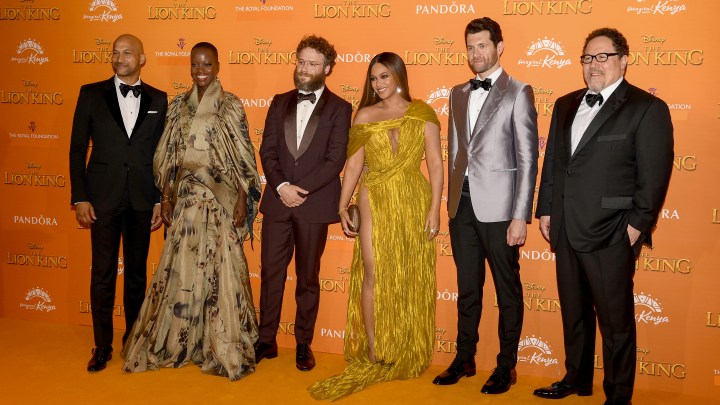 Part of the cast and crew at the European premiere of Disney's "The Lion King" at Odeon Luxe Leicester Square on July 14, 2019 in London, England. Gareth Cattermole/Getty Images for Disney
By The Numbers

Part of the cast and crew at the European premiere of Disney's "The Lion King" at Odeon Luxe Leicester Square on July 14, 2019 in London, England. Gareth Cattermole/Getty Images for Disney

Hundreds of wildebeest stampede down a cliff, kicking up clouds of dust. A lion throws his brother into the rushing herd in a stunning fratricide. A young Simba stutters out a confused, desolate, “Dad?”

It’s no wonder the 1994 Disney film became a classic with scenes like these following a story line of redemption and self-discovery. The five hit Elton John and Tim Rice songs on the soundtrack didn’t hurt either. So to celebrate the live-action remake’s release this week, we thought we’d dive a little deeper on the numbers behind the franchise that shaped so many of our childhoods.

The movie was the 32nd animated film produced by the Walt Disney Animation Studios, and its first to feature an entirely original story line, though that really depends on whom you’re asking. The Mouse said that this was its first unadapted animated film, but anime fans were quick to point out the striking similarities to a 1960s Japanese-created American cartoon, “Kimba, the White Lion.” Disney denied the plagiarism allegations, saying “The Lion King” was an original work that took four years to create, originally bearing the title “King of the Jungle.”

The allegations seemingly didn’t have much effect on the film’s success. “The Lion King” grossed $42 million and drew an audience of 10 million people — and that was just its opening weekend.

Raking in over $422 million in domestic grosses — and a worldwide total of $968 million — it’s the third-highest grossing animated film in history. It also ranks No. 4 on the American Film Institute’s Top 10 animated films ranking.

It’s the circle of … profit?

The two-time Academy Award-winning animated musical was soon turned into a Broadway musical. The show opened in November 1997 and is the third-longest-running Broadway show to date. It boasts more than 70 major arts awards internationally, including six Tony Awards.

The Broadway production, along with its 25 international productions and tours, had grossed over $8 billion as of 2017. Over 100 million people have witnessed 18-foot giraffes gliding across the stage. Audiences watch actors control more than 230 puppets on stage. It seems the 37,000 hours it took to build all those puppets and masks paid off.

The franchise keeps on going. Two more movies — “The Lion King II” and “The Lion King 1½” — were released in 1998 and 2004, respectively. There was also the five-season stint of “Timon & Pumbaa.” And in 2015, a series now in its second season, “The Lion Guard,” premiered on Disney Junior with a one-hour TV movie, “The Lion Guard: Return of the Roar.”

All these numbers don’t include sales from merchandise — which Entertainment Weekly reported as exceeding $1 billion in the first year after the film’s release — or the three video games based off the films.

The 2019 live-action remake has a lot to live up to. But, with an all-star cast featuring Beyoncé Knowles-Carter, Donald Glover and, reprising his role, James Earl Jones, it just might. Early tracking puts the opening weekend estimates for the film at $150 million, with Fandango reporting a record number of presale tickets.