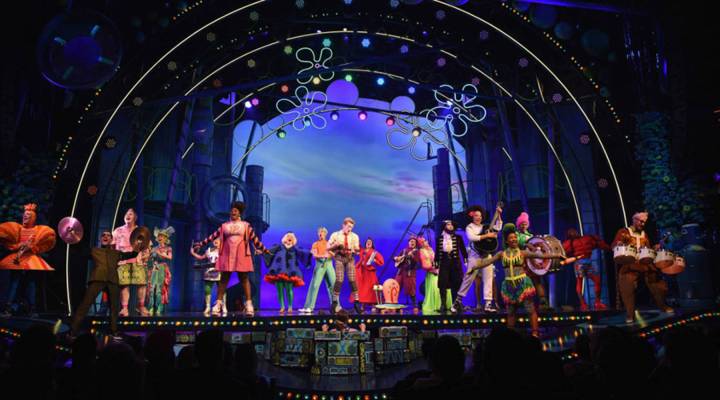 Tony Award nominations — the Oscars for the theater — were announced this week. The musicals “Mean Girls” and “SpongeBob SquarePants: The Broadway Musical” racked up a dozen nods each. But it wasn’t exactly hard to predict that a show based on a hit movie or TV show might rise to the top, because Broadway is looking a lot like a multiplex these days.

“Frozen,” based on the Disney movie, opened in late March. (It was also nominated for the Best Musical.) Musicals based on “Pretty Woman” and “King Kong” are slated to debut before the end of the year. And eight more movies-to-musicals are in development, including “13 Going on 30,” “Beetlejuice” and “The Devil Wears Prada.”

“Movie studios are so involved on Broadway,” said Jennifer Tepper, a musical theater historian and programming director at Feinstein’s 54 Below, a cabaret restaurant in New York City. “There are people at every movie studio that are in charge of developing properties for the stage.”

Then, of course, there’s “Harry Potter and the Cursed Child.” No singing, but by now, Harry has plenty of book and movie credentials. And as of yesterday, a stack of Tony nominations.

Anthony Rhine is a theater professor at Florida State University and a former producer. He says budgets on these big productions can easily run into the tens of millions. “Spiderman: Turn Off the Dark,” reportedly shot past $70 million, and that was in 2010.

According to Rhine, famed theater producer and director Hal Prince, who won 21 Tony Awards, once said that it used to be that you could put on a new musical if you could get 50 of your friends to invest. If each friend put $1,000 in, you’d have enough money to develop the show.  If it did well and everyone made back their money, great. If it didn’t, you’d be out a thousand bucks, but you still got to be part of a Broadway musical.

“But when you’re talking about tens of millions of dollars that people are investing … they want some sort of insurance that there’s the likely potential for success,” Rhine said.  “If you choose underlying material that already has a commercial following, you’re probably more likely to have success.”

The idea of turning a hit movie or book into a Broadway show isn’t new. “The Producers,” one of the major successes in the last 20 years, opened in 2001. And the majority of theatrical productions are based — even loosely — on something, whether a book, historical figure, poem, song, or reinterpretation of a classic tale.

People stand in line outside the St. James Theatre in New York April 25, 2001 to purchase tickets for the Broadway production of “The Producers.”

More recently, musicals have been culled from the catalogues of artists like Donna Summer and Jimmy Buffett. Musicals based on the lives of The Temptations and Cher are scheduled to open later this year. The smash hit, “Mamma Mia!” was based on the 70s pop hit from Swedish band, ABBA.

“The more that movie studios have gotten involved in Broadway and with musical catalogs — like Cher’s catalog or Jimmy Buffett, then the more that those become what the musicals are based on,” Tepper said.

There are only 41 Broadway theaters — and they stay booked most of the time.  “Everyone wants to get in,” Tepper said. “In our current marketplace, there are tons of shows and plays and musicals and special events every season that have the money, they have the capitalization, they have the show, and they can’t get a theater because it’s so competitive.”

The theaters’ owners act as gatekeepers. “There are these very powerful institutions that own these houses that essentially control what people see on Broadway,” Tepper said.

Any producer who wants to bring a show to Broadway meets with the theater owners to pitch their show and convince the theater that they’ve got the show that’s going to be the hit. Occasionally a movie-to-musical show comes along and busts every record in sight. Enter “The Lion King.”

“’The Lion King’ came and changed everything,” said Laura Heywood, a professional theater-goer who tweets under the name BroadwayGirlNYC and is on track to see 310 shows this year.

“The Lion King” opened in 1997, just three years after the Disney movie, and it was an immediate smash. “They brought in this very high-art director,” said Heywood, referring to Julie Taymor, the musical’s Tony Award-winning director and costume designer. “And it became this thing that you would have never imagined was based on a kid’s movie.”

Dancers perform during a media preview of “The Lion King” musical performance in Singapore on March 9, 2011.

“The Lion King” still holds the record for most-profitable Broadway show of all time. According to Forbes magazine, the musical has brought in more than $8 billion in 20 years, making more money for Disney than Star Wars. “The Lion King” is also the “highest-grossing entertainment property in history,” ahead of “Phantom of the Opera” and the film “Avatar.”

And while movies can earn a lot of money fast, a successful musical can have a long and more productive life, touring cities nationally and internationally for years. For instance, “Phantom of the Opera” has been running since it opened on Broadway in 1988, making it the longest-running Broadway musical of all time.

With all the attention and money being directed toward turning movies into musicals, it’s easy to get the idea that Hollywood is taking over Broadway.

But Tepper points out that three highest earning musicals of the past couple of years were all original, or less commercial musicals, and rated highly by critics: “Dear Evan Hansen,” “Come From Away” and, of course, “Hamilton.”

“Those are money-making musical hits,” Tepper said. She thinks people assume that the reason that movies are turned into musicals are because it’s easy or because the more commercial products always make money. “But any producer or theater owner who works on Broadway knows that’s not always the case,” she said.

The last four years of Best Musical winners were “Dear Evan Hansen,” “Hamilton,” “Fun Home,”and “A Gentleman’s Guide to Love and Murder,” either original, or based on books. The Tonys are June 10, and we’ll see if the highest-earning shows dovetail with the most nominated.