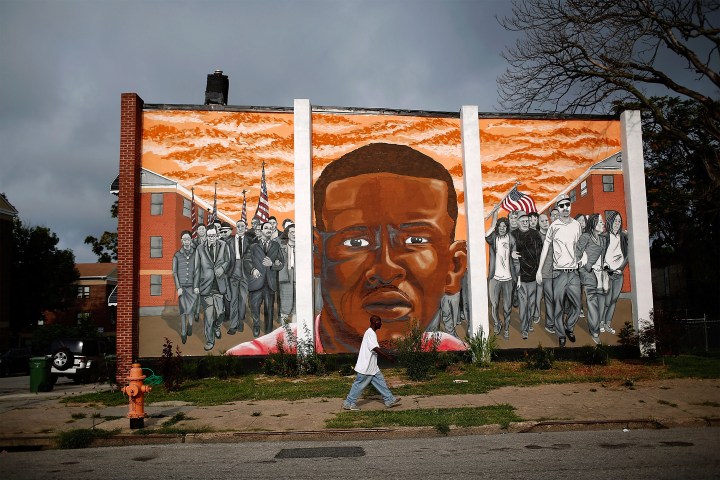 COPY
A mural of Freddie Gray near the location where he was arrested is pictured in Baltimore, Maryland in 2016. Win McNamee/Getty Images
Shelf Life

A mural of Freddie Gray near the location where he was arrested is pictured in Baltimore, Maryland in 2016. Win McNamee/Getty Images
Listen Now

It’s 2019, but in cities and towns all over America, some communities remain segregated along racial lines.

When 25-year-old Freddie Gray died in police custody in 2015, racial tensions in the city of Baltimore became a national topic. But these issues existed long before Gray’s death. In his new book, “The Lines Between Us: Two Families and a Quest to Cross Baltimore’s Racial Divide,” journalist Lawrence Lanahan takes a look at the history of segregation in Baltimore and how it shaped the city.

Marketplace’s Kimberly Adams spoke with Lanahan about segregation in Baltimore, and the impact on the personal economies of people who call the city home.

Kimberly Adams: Can you lay a little bit of groundwork in terms of the racial and economic segregation in Baltimore, and how the city got there?

Lawrence Lanahan: Just like any region in the country, it started off with explicitly discriminatory practices when those were legal segregation ordinances. You can’t live here, redlining, we don’t want to invest in your neighborhood. And in the Baltimore region, Baltimore County, which surrounds Baltimore City, didn’t have any public housing at all. And the U.S. Commission on Civil Rights described this trend across the country as the “white noose,” that the suburbs of this white noose around increasingly black cities starving them resources.

Adams: Wow. So, yes, one of the things that you lay out multiple times in your book is just that a lot of this segregation comes down to where the city was able to build affordable housing. Why was the city limited in where it could build?

Lanahan: White America has a way, and certainly in the past, of institutionalizing their personal prejudices. Right? They were gonna build — so where Freddie Gray was arrested, Sandtown, West Baltimore, almost entirely black — there’s a public housing project called Gilmore homes. They were going to build that and the white part of Southwest Baltimore and the community near there said: “no, white kids aren’t going to be safe going to school, white people aren’t going to be safe going to work.” So they built it in Sandtown, and under the guise of slum clearance. But I have pictures of the houses in that neighborhood, in my book, they were nice. It wasn’t slum clearance.

Adams: You tell the story in your book of several people, but let’s focus on one in particular: a woman named Nicole Smith. She grows up in Sandtown, which is this high-poverty area in Baltimore. How did growing up in Sandtown influence her life, especially as a young adult?

Lanahan: Well, if you look at the numbers, I mean, her school or middle school is one of the lowest ranked. The housing, a lot of it was vacant. This was just a part of town where there were a lot of stressors, you know? And her family, you know they all ran a tight ship and they did really well for their circumstances, but they were crowded into their house and as she got older and eventually had kids she just she wanted to find opportunity for her son. And it just really, she didn’t see it there.

Adams: Nicole Smith eventually moves to the suburb of Columbia with her young son. Why was that a big deal for them, economically, in particular?

Lanahan: The opportunity is already there. I mean, there’s kind of two ways people try to deal with this segregation and concentrated poverty, you know, pour some resources into the neighborhoods where there is a lot of poverty, you know, try to bring opportunity there. Or try to get people out to where there is opportunity, and she got a special voucher that you can only use in areas that are low poverty, low minority population. She went out to Columbia, that’s a suburb 20 minutes outside of Baltimore, saw the schools, all the houses and knew family who had made it out there, was like, yeah, that’s where I got to be for my son. And it worked well for her, too.

Adams: What do you mean? How did it work well for her?

Lanahan: Let’s say she was trying to get her degree, right? And she was going to the community college in Baltimore. And she just didn’t feel like it was working for her there. It was taking her, like a lot of people, several years to get an associate’s degree. She got out to her county, went to Howard County Community College and finished in like two or two-and-a-half years, and then that degree helped her build a home daycare so she had a business. Things started moving quickly for her, not just because she was working harder, but because the place where she was was designed to facilitate that.

Adams: Much of the book focuses on kind of this push and pull among activists and advocacy groups and governments about where money should go; should it go into building up these high poverty communities, or moving families out of those communities to create more opportunities. What does the story of Baltimore and all the different ways they tried to address this tell us?

Lanahan: You see, people live through both. I don’t think it’s either-or, I think it’s both. And, I mean, with limited resources this will become a battle sometimes, right. There’s only so many federal tax credits to give out to entice developers to build low income apartments, affordable housing. Do we build that affordable housing where poor people already are? Makes sense, right? There’s a need. Or do we build it in the suburbs so that poor people have an opportunity to get out to better prospects? I don’t think you can really come down on one or the other. Place determines your outcomes. You need to build up these communities where they are.